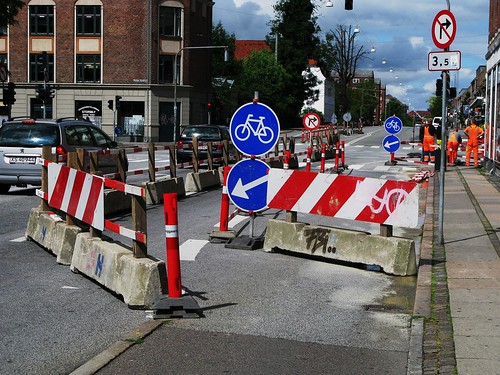 Many construction projects are likely to pose significant problems for cyclists this year. Dexter construction, which is scheduled to begin pavement removal today, will likely prove problematic to anyone who it not extremely familiar with the area. Cyclists have also expressed confusion and frustration over construction on Alaskan Way S. King County has yet to announce a reasonable detour for the closure of a large section of the Burke-Gilman north of Seattle this summer.

It seems relevant to look at how other cities accommodate cyclists during road work. And where better to look than Copenhagen? Copenhagenize published a piece a few days ago with photos of construction mitigation all around the Danish city. Spoiler alert: The Danes prioritize their cycle tracks over motor vehicle traffic lanes during construction.

At all times, prioritising bicycle traffic is of the utmost importance. A city must send concrete signals that it takes bicycle traffic seriously. Cycling citizens need a city that is reliable in its maintenance and prioritisation of bicycles. If they can count on their infrastructure being taken care of, it will encourage them to ride. If trains, for example, are unreliable, fewer people will use them and look to other modes. The same applies to bicycle traffic. Rain or snow. Roadworks or smooth sailing. 24-7.

Clearly, we can’t just shift our cycle tracks around construction in Seattle. We don’t have any cycle tracks. But you get the point. If cyclists are not provided with dependable conditions, they will be less likely to view cycling as a dependable method of transportation.

This entry was posted in news and tagged construction, copenhagen, copenhagenize, mitigation. Bookmark the permalink.

7 Responses to How Copenhagen accommodates cyclists during road work