How safe will the Dexter cycle track be? 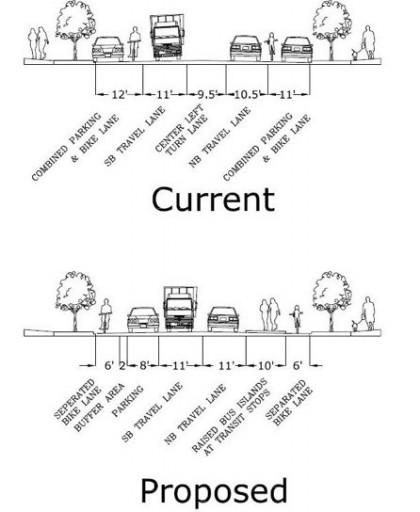 Robbie at Velotopia has concerns about the safety of the new cycle track proposed to Dexter Ave.

Personally, I’m terrified at the prospect of being confined to a cycletrack between bus stops/parked cars and sidewalks when I’m doing 25+ mph on the descent. I think cycletrack infrastructure would work better on a flat route with not as many driveway/intersection access points. Maybe that’s just me? Come share your opinion!

There will be an open house to discuss the proposal. I would need to see how intersections and driveways will work with the track. I am very excited about the idea of getting more space on Dexter and getting out of the exhaust (especially when climbing). However, if it’s not done properly, it could be more dangerous than it currently is.

This 2009 study of cycle tracks by a Portland group will prove to be very useful, I think, in discussing cycle tracks in Seattle. It would help if we read up on it before going to this open house and starting debate.

There is skepticism about whether cycle tracks are safer than riding in the street. However, they have proven to be more welcoming to new riders, as ridership increases dramatically (18-20 percent) once they are put in. For a confident, experienced urban biker, riding in traffic may be safer. But for those just starting out who are scared or out of shape, cycle tracks may be just what they need to get going.

I look forward to this really important debate, the results of which I could see forming future local biker opinion about cycle tracks in our city.

This entry was posted in news and tagged cycle tracks, dexter, road improvements. Bookmark the permalink.