Can a Washington State plan centered around walking, biking and accessibility defeat a bunch of highway and bridge projects to win the 2022 America’s Transportation Award? Well, it can with your help.

Remember those annoying “people’s choice” competitions that were everywhere like a decade ago where you had to vote every day in order to help your favorites bakery or whatever win? This is one of those, except it is sponsored by AAA, the U.S. Chamber of Commerce, and the American Association of State Highway and Transportation Officials (“AASHTO”). This award usually goes to highway megaprojects like the 2020 winner: The SR-99 highway tunnel. So yes, I am suggesting that you should bookmark this page and vote every day until October 21 for the “Active Transportation Plan 2020 and Beyond.”

No, this award isn’t the biggest deal in the world, but it would be delicious for this kind of plan to defeat a bunch of major highway projects. It could also bring some much-deserved attention to the plan, which got buried in the news thanks to the pandemic and, you know, everything else that was happening in 2020 and early 2021 when it was seeking public feedback and attention. The plan is really great and attempts to quantify something that most states have never considered: What would it cost to make all state-run highways safe for people walking and biking? The answer for Washington is counted in billions: 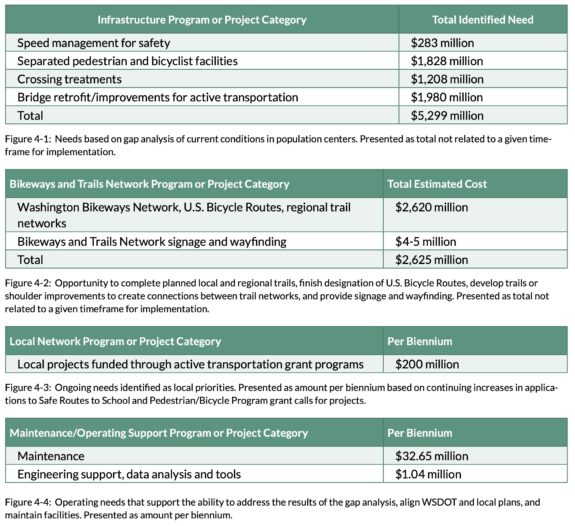 These totals are simultaneously a lot of money and also not too out of place among the typical highway megaproject. For the cost of the SR-99 tunnel and the 520 Bridge Replacement Project, Washington State could pay for the entire statewide Active Transportation Plan. With pedestrian fatalities skyrocketing across the nation and especially in Washington State, the pricetag looks reasonable. Since you can’t really buy something without a pricetag, we have this plan to thank for putting some numbers and strategies behind the problem.

Perhaps the top reason for voting for this plan is that the national attention could encourage other states to create their own active transportation plans and come up with their own lists of costs and strategies. It’s long past time for states to put the same kind of serious money behind walking, biking and accessibility as they do for highways.