Only Brooklyn and San Francisco ranked higher than Seattle in the 2022 list of the most bike-friendly big (300,000+ population) U.S. cities by national non-profit advocacy organization People For Bikes. Portland, Oregon, ranked 5th behind Queens.

These rankings are of course a rather imperfect science, but they’re interesting (NOTE: The Seattle page says it is the #4 big city, but their list of big cities puts Seattle at #3. I’m going with #3 since I can’t figure out what the 3rd city in front of Seattle would be). People For Bikes created a list of criteria based on the existing bike network, ridership, safety and some community response elements such as “how safe people feel riding a bike in their city.” Here’s a visual of Seattle’s results: 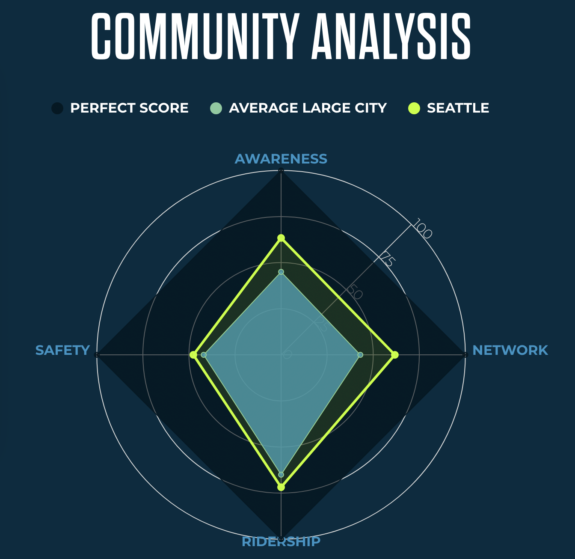 They also have a bike network analysis tool that spits out a map of “how well bike networks connect people with the paces they want to go.” That’s a pretty tough goal to reliably measure, but it’s interesting to explore their results: 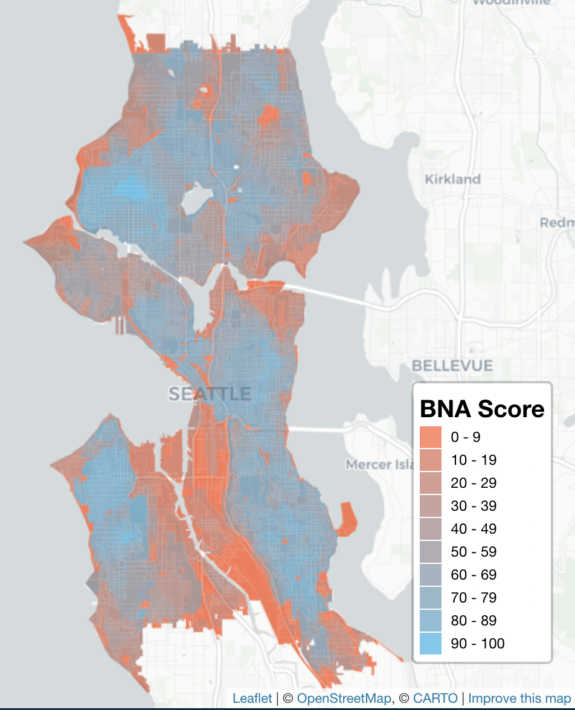 Explore an interactive version of the map. You can also check out their methodology.

Southeast Seattle seems especially off here, though I suspect this is largely because of the Chief Sealth Trail and the Rainier Valley Neighborhood Greenway. Both facilities look great on a map, but are much less useful in real life due to their many steep climbs. The flattest and most direct routes, MLK Jr Way and Rainier Ave, do not have bike facilities. But it is difficult for an automated analysis tool to account for such nuances.

The most important thing to note from the 2022 ranking is that Seattle’s score increased from 53 to 58 once SDOT constructed about 10 miles of protected bike lanes that had been delayed during the first half of Jenny Durkan’s mayoral term. These included vital and difficult-to-build bike connections to and through downtown from South Lake Union, Lower Queen Anne and the International District. I absolutely agree with the score increase here, because those projects have revolutionized bike access to downtown. Many people have not yet realized how great they are because so many downtown-based jobs have yet to return.

The lesson here for city leaders is that when we build out our bike network, it works, and people across the nation take notice.

People For Bikes also published a great side story focused on Seattle and the work of Seattle Neighborhood Greenways. Here’s an excerpt:

While Seattle has made significant progress in recent years and remains one of the best places to bike in the U.S., there’s still room for improvement when it comes to connectivity. According to [Seattle Neighborhood Greenways’ Clara] Cantor, many bike infrastructure projects get heavily compromised before completion by stopping shy of a major intersection, not quite reaching a destination or being built with protection only in one direction. Compromising on individual projects can harm the connectivity of a network, as well as interrupt ambitious mode shift goals.

“If our goal is to have more people biking, that actually won’t happen if it feels the way it currently feels to bike,” said Cantor. “You have to make it comfortable, efficient and joyful or people are going to try it once and not come back.”

Founder and Editor of Seattle Bike Blog.
View all posts by Tom Fucoloro →
This entry was posted in news and tagged people for bikes, people for bikes city ratings 2022. Bookmark the permalink.

8 Responses to People For Bikes ranks Seattle as the #3 bike-friendly big U.S. city