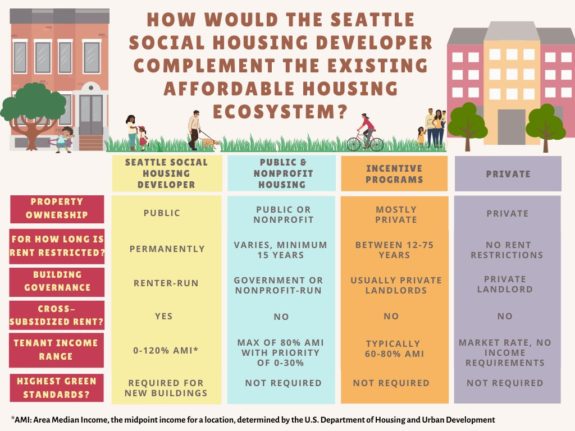 From House Our Neighbors.

The private market for homes in the Seattle area has been climbing out of reach for many people for many years, and there is no reason to believe it will become affordable any time soon. Meanwhile, the wait lists for existing affordable housing units is very long and getting longer. The city has spent all these years arguing about what to do rather than taking real action. Most of the debate has been about where increased private development should be allowed as though private development was the only tool available to reduce housing costs. But there is another way: Social housing.

The House Our Neighbors coalition, led in large part by Real Change, kicked off a signature drive today to put Initiative 135 on the Seattle ballot in November. You can get involved in the effort by volunteering or hosting a fundraiser. And if you see someone collecting signatures, add your name.

I-135 would establish a Public Development Authority tasked with building and operating affordable housing. The authority would receive public funds, but it would also have the ability to bond against rent payments to fund further development. Because units are fully owned by the public, they can remain affordable permanently. I-135 does not include any funding, a decision the creators made in order to avoid violating Washington State’s rule limiting ballot initiatives to only one subject at a time, according to Publicola. Instead, it would establish an authority and structure that could be funded later via the city budget or another ballot measure.

When people can’t afford a home, they are kicked out into the street. Our social safety nets are torn to shreds, and many people fall straight through. We need to be using every tool possible to make more homes that are truly affordable, and social housing is one of them.

The proposed Public Development Authority would operate differently than the existing Seattle Housing Authority, which relies on federal investment and financing options. It would also be different than existing non-profit low-income housing developers because the public would own the properties, giving the PDA access to financing options only available to governments. House Our Neighbors explained it this way on their website:

This is a very exciting concept. Our city has so much wealth, we need a mechanism to use just a little bit of it to help keep people in homes.

This is also a transportation issue because people need to be able to afford to live in Seattle, especially the parts of the city with great walking, biking and transit access. Building a quality bike network is great and all, but not if only the wealthy can afford to live close enough to easily use it. Biking is an affordable, fun, healthy and extremely efficient way to get around, and more people should be able to safely and easily bike for daily transportation. One way to increase access to safe bike routes is to build more of them. Another way is to build more homes near the quality bike routes we already have. Both of these strategies are needed.

This entry was posted in news and tagged house our neighbors, i-135. Bookmark the permalink.