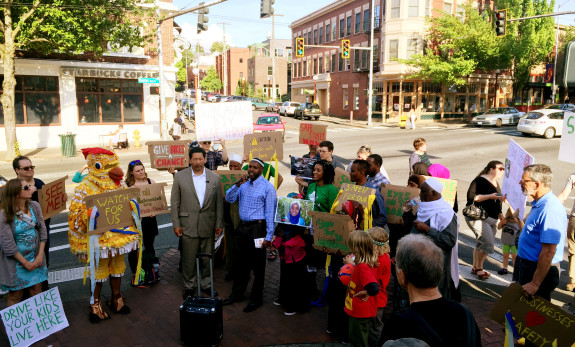 Then-Councilmember Bruce Harrell at a 2015 protest for a safer Rainier Ave.

Congratulations to Mayor-Elect Bruce Harrell on a convincing win. If past voting patterns hold true as the rest of the ballots are counted, Harrell is positioned to win the Mayoral race by a wider margin than Jenny Durkan did in 2017.

Lorena González not only lost the election, but she also will no longer be on City Council. We wish her the best on whatever she pursues next, but it feels like a big missed opportunity for our city government to lose someone who has been an excellent leader in very difficult times.

Biking and transportation in general did not play a significant role in this election, though it should have. It was barely discussed in debates, and a pre-election opinion poll Crosscut commissioned put transportation at 7th out of 8 issues tested. Homelessness, policing, crime and even residential zoning placed significantly higher. Regardless, the Harrell administration will have an enormous impact on Seattle’s transportation future. He will lead the effort to replace the Move Seattle Levy due to expire at the end of 2024, a once-in-a-decade opportunity to significantly alter transportation funding in the city.

Seattle Bike Blog did not endorse Bruce Harrell, but that does not mean Harrell will be anti-bike once in office. He received a dual endorsement from Washington Bikes, and his campaign platform included: “Continue investing in safe sidewalks and bike lanes while implementing Vision Zero concepts that will help keep every commuter safe.” Though he said during a televised debate that he “won’t lead with bikes,” he voted in favor of Seattle’s ambitious Bicycle Master Plan as a City Councilmember. His name is attached to that plan just like it is on the Move Seattle Levy, Vision Zero Plan, Climate Action Plan and many other bold and progressive Seattle policies developed during this time on Council.

Harrell should be a significantly better mayor than Durkan. He is a longtime politician and pragmatic leader who responds to and celebrates community organizing. He is also very familiar with how the City Council conducts its business and how transportation plans and priorities are created and funded. While Mayor Durkan had no problem ignoring Council-approved plans and policies, Harrell understands all the work and public outreach it took to make them. He also knows how persuasive and organized safe streets and bicycling supporters can be, and he has a big incentive to bring them into the coalition to pass an ambitious and successful transportation levy in 2024.

This moment feels a little bit like 2013, when Ed Murray was elected mayor (this was years before the public knew about the multiple allegations of sexual abuse that ultimately forced him to resign in disgrace). Murray was not the preferred candidate of bike organizations or Seattle Bike Blog, but his administration knew they had to win wide public support for a bold transportation vision because they needed voters to approve a transportation levy during their first term. They rightly saw the biking and safe streets movement as a potent force, and immediately surprised everyone by pushing hard to demonstrate the potential for projects like the 2nd Ave protected bike lane downtown. Safe streets advocates rallied around the Murray administration’s transportation vision as he championed safe streets causes. When the 2015 levy campaign came around, safe streets advocates were among the biggest boosters, packing all the public events and relentlessly making calls and knocking on doors to sell the package and get out the vote. The levy was approved by a landslide.

Today, traffic deaths are on a steep rise nationwide, and Seattle has not been immune to the trend. Though Seattle is a leader in safe streets, with one of the lowest traffic fatality rates among big cities, we have not done enough. People are dying, and Seattle doesn’t have the luxury of waiting to take action. Safe streets advocates are looking for a champion, and they will go hard for Harrell’s transportation efforts if he demonstrates bold leadership.

It has not been fun to be an oppositional force for the past four years, but Mayor Durkan didn’t give bike advocates any other choice when she delayed or cancelled planned bike projects across the city. During her term, SDOT had a disastrous year without a Director, then immediately faced a series of crises culminating with the West Seattle Bridge closure. The good news is that Mayor Durkan is handing Mayor-Elect Harrell a department that is finally heading in the right direction. Her administration has approved a number of great projects in the past year or so, like the 4th Ave bike lane downtown. Sure it was years late, but it happened. Mayor-Elect Harrell is not responsible for the delays and mistakes of the Durkan administration. He’s got a clean slate. He will have three more years of Move Seattle projects to deliver before selling voters on a new levy. It’s not an easy job, but getting a lot done in the next three years will be vital to restoring public trust in the Department of Transportation.

I know many readers will be disappointed that González did not win. But give Mayor-Elect Harrell the opportunity to be a champion for safe streets even if it isn’t his marquee issue. As a Councilmember, he showed up for Rainier Ave in 2015 when community members and safe streets advocates got organized to draw attention to the need for changes following a series of terrible collisions. He knows what’s at stake and what we can accomplish when we work and organize together.

This entry was posted in news and tagged 2021 general election, bruce harrell. Bookmark the permalink.