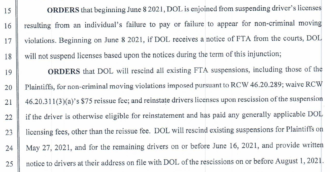 Excerpt of the court decision (PDF).

Washington State is reinstating about 100,000 people’s driver’s licenses after Thurston County Superior Court found it unconstitutional to revoke a license due to failure to pay a fine or appear in court for a non-criminal moving violation. The state’s Department of Licensing will not appeal the decision.

Though it may seem counterintuitive at first, this is good news for traffic safety in our state. Revoking a license should be reserved for people who have demonstrated that they are a serious danger behind the wheel and pose a threat to public safety. It should absolutely not be used as a way to further punish people for being poor.

One of the biggest challenges to stopping repeat dangerous drivers is how to stop them from continuing to drive regardless of the status of their license. It is not a great idea to pack prisons full of bad drivers, but there needs to be some significant deterrent for the small percentage of people who continue making dangerous decisions such as repeat DUI drivers. One such deterrent is to make it a significant offense to drive with a suspended license.

However, when licenses can be suspended solely due to failure to pay a fine, then the penalty for driving with a suspended license becomes a penalty for being poor. That is not at all what that infraction should be trying to accomplish. The act of driving even though a court has decided you are too dangerous to drive is a serious threat to public safety. Driving without paying a ticket is not a serious public safety threat. These acts should never be treated as equal.

Michelle Baruchman at the Seattle Times summed up the problem well:

Previously in Washington, a driver who received a speeding ticket or another kind of moving violation, could pay the fine or request a hearing. If the individual either did not respond to the citation or failed to appear in court, their driver’s license would be suspended.

People caught driving with a suspended license for noncriminal offenses were charged with a misdemeanor crime that led to 90 days in jail or another $1,000 fine — adding to existing debt and making it harder for drivers to get their licenses back, [ACLU Senior Staff Attorney John] Midgley said.

In its complaint, the ACLU argued the “severe and life-altering” impacts of the law would often “trigger a cascading set of adverse consequences” felt acutely by people with lower incomes. Wealthier individuals could retain their licenses “even though they are guilty of the exact same infractions.”

The court decision effectively speeds up a change that was already coming. A new state law that takes effect January 2023 will rewrite the conditions for having a license revoked. Senate Bill 5226, passed earlier this year, removes failure to pay as a reason to revoke a license. However, the new law retains failure to appear in court as a reason.

Having your license suspended should mean something. Licenses should be entirely about a driver’s demonstrated ability to operate a car safely. If a license is revoked, it should be due to that person’s past dangerous decisions behind the wheel and nothing else.

Founder and Editor of Seattle Bike Blog.
View all posts by Tom Fucoloro →
This entry was posted in news and tagged department of licensing, suspended licenses. Bookmark the permalink.