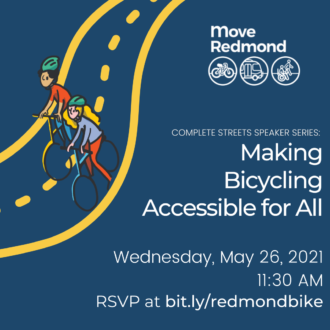 The Greater Redmond Transportation Management Association is now “Move Redmond.” That seems like a good name change, though I may be biased since my spouse Kelli works for Move Redmond as the Advocacy and Communications Director. But it is a pleasant upgrade in my life that I no longer have to hear “GRTMA” pronounced out loud every day.

The new name also reflects the non-profit organization’s expanded scope since Executive Director Kirk Hovenkotter, formerly at TransitCenter in New York, took over in 2019. In addition to commute trip reduction work with major employers, the organization is also working to boost its advocacy efforts to help more people bike, walk and take transit in the area.

For example, they are hosting a free webinar 11:30 a.m. Wednesday called “Making Bicycling Accessible for All” featuring a great lineup of local leaders:

What will it take to make Redmond a place where people of any age or ability can safely bike for transportation? How are we using bikes as a tool to connect our communities? Our panel of biking experts will explore ways to use biking to overcome barriers to bicycling for everyday use, including discussing race, body size, and infrastructure. This event will leave you feeling inspired and excited to shape an accessible bike network on the Eastside.

“We’ll be discussing race, body size and infrastructure” said Transportation Specialist Sol Dressa. “We want to continue this conversation about how unsafe our streets feel and how Black and Indigenous folks are affected by them.”

“There are a lot of community organizations on the Eastside, and until recently we really hadn’t made a lot of those connections,” said Dressa. They are also working to collect people’s stories as ways to better localize and illustrate their advocacy efforts.

“I like using storytelling and personal narratives to push our agenda forward,” said Dressa, who has been leading a project called “Our Commute, Our Stories.” People who “travel to or through Redmond” can share their stories and receive a $25 ORCA Card in return. But they aren’t only waiting on other to submit stories, Dressa is also interviewing people she meets around town. The project is part of was Dressa described as “working to uplift the voices of folks who are living in Redmond or commuting to Redmond.”

“I talked to woman trying to commute by bus from Woodinville to Seattle, but her previous bus got cancelled so she had to take a much earlier bus,” said Dressa. So the woman was transferring buses in Redmond, but only because more efficient and direct service was cut. Collecting stories will also guide their advocacy.

“We keep hearing that people’s bus is no longer running. How much longer is it taking them to get from point A to point B. How does that integrate into these policies that are being proposed?”