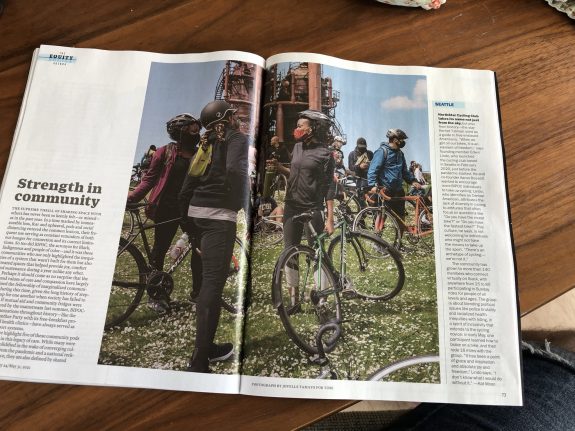 Very cool to see Seattle’s NorthStar Cycling Club in Time Magazine this week. The young club is featured as part of the issue’s Visions of Equity project as an example of “How Communities of Color Have Found Strength, Joy and Comfort in a Year Like No Other.”

“When we get on our bikes, it is an element of freedom,” says founding member Edwin Lindo, who launched the cycling club based in Seattle in February 2020, just before the pandemic started. He and co-founder Aaron Bossett wanted to encourage more BIPOC individuals to take up cycling. Lindo, who identifies as Central American, attributes the lack of diversity in cycling to attitudes that often focus on questions like: “Do you have the nicest bike?” or “Do you have the fastest bike?” This culture, he says, is not welcoming to individuals who might not have the means to take up the sport. “There’s an archetype of cycling— we’re not it.”