Apple Maps now has bicycling directions, and they are OK compared to Google’s dusty service 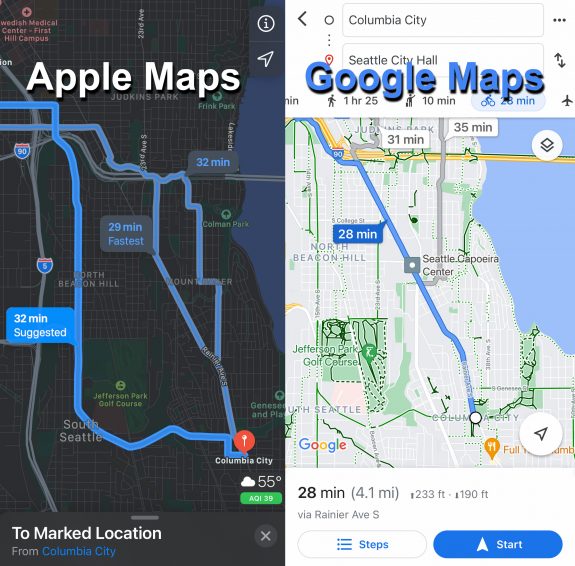 Eight years after Google Maps introduced biking directions in its iPhone app, Apple Maps has finally introduced the feature. And much like the Google version, it is…OK.

When Google first introduced biking directions, it wasn’t perfect. The route decisions were rarely what I would choose, and sometimes it chose very busy streets. But at least it gave a biking option and a time estimate, which were very useful. It was a promising start, and I was hoping that the company would continuously improve the service so it would more consistently find high-quality routes. But like so many Google services, the company has let the feature languish with very few if any improvements (they improve the map data, like which streets are one-way, etc, but the way it makes routing decisions is much the same).

Apple Maps also gives OK bicycling directions. They are almost never the routes I would choose, but at least they usually work. Both services offer information on elevation changes and give a couple different routes to choose from.

Apple does offer a couple interesting features that Google lacks, like options to avoid hills and busy streets, but they seem to be a bit confused by Seattle’s complicated geography. For example, if you select either “avoid hills” or “avoid busy roads,” it will suggest taking 3rd Avenue downtown rather than the 2nd Avenue protected bike lane.

I’m guessing they have plugged some kind of traffic data into this, perhaps gathered from people driving with Apple Maps directions or from TomTom, to determine that 3rd Avenue is not a busy street. Unfortunately, they didn’t account for the fact that it’s a major bus corridor with car restrictions (thus the lower vehicle use). So sure, you can bike on 3rd, but I would suggest 2nd for most situations because of the bike lane.

I like the idea behind the options to avoid busy roads and hills, and hopefully Apple continues to work on the features to make them more effective.

I also hope that Apple entering this battle lights a fire under Google to put a team on improving their bicycle directions engine. Google’s map data, especially for short trails and such, is still unparalleled, so they should have an advantage over Apple here. They also have Street View images for many trails, which can be very helpful. But they are still missing features to help people find routes that better fit their biking preferences, like options to avoid hills or busy streets. Let’s see Google Maps try to show Apple Maps how to do it right.

But look again at the comparison at the top of this story. Neither app has a good route for biking from Columbia City to downtown. That may be because there is no obviously great option, but I would never suggest any of the routes either app found. Apple Maps seems to not know how to route people though Jefferson Park, and Google doesn’t even bother to offer any options that don’t take Rainier Ave much of the way. I have to give the win here to Apple because it at least offers more options, not bad for a service on day 1 compared to a service on day 2,845.

The biggest feature Apple is missing compared to Google is the biking layer. Routing information is somewhat useful, but I find the best way to fine-tune your route is to look at all the available trails and bike lanes on top of the satellite image. As you can see from the comparison image at the top, simply having the trails and bike routes marked out in Google makes finding your own route so much easier than the sleek Apple Map. This seems like a feature Apple could add without too much trouble since the routing data must be based on a biking layer that is invisible to users.

I welcome competition in the bike directions space. As far as I’m concerned, neither company can claim to be the best right now, and there’s a lot of room to improve. There are plenty of people out there with a bike in the garage who are nervous about biking somewhere they haven’t been before because they don’t want to get lost or stuck on a super busy street. A mapping app that can offer more options for people to find routes that more consistently serve their biking preferences would be a great way to help people expand the number of trips they make by bike. Just telling people to bike down busy Rainier Ave isn’t going to cut it. People already know where Rainier Ave goes. If they are looking up bike directions, odds are good that they want to find a different option.

The other option for best bike routing app is Ride With GPS. It is not nearly as user-friendly as Google Maps or Apple Maps, and the mobile routing feature requires a $50 per year subscription (but the free version is still useful). It’s the most detailed and versatile option, and includes a social route-sharing element that is really cool.

Do you have a favorite bike routing app that I missed? Let us know in the comments below.

This entry was posted in news and tagged apple maps, google maps. Bookmark the permalink.

10 Responses to Apple Maps now has bicycling directions, and they are OK compared to Google’s dusty service