Bellevue is getting ready to rollout its first take at a neighborhood greenway this summer, a north-south route running along side streets to the east of 164th Ave NE between Nothrup Way and SE 14th St, where it will meet up with the Lake to Lake Trail.

The 2-mile project is very low-cost, coming in at just $200,000. The project team will add wayfinding, which is very useful since so few side streets go through in this area. They will also install new paint-and-post traffic circles at some intersections and turn stop signs to face cross-traffic instead of greenway traffic. And they will drop the speed limit to 20 mph.

The nearby 164th Ave NE is more direct and already has some stretches of painted bike lanes, though they are very incomplete and are definitely not welcoming to people of all ages and abilities.

The proposed route was trialed as a Healthy Street in 2020, and the number of people biking on the route increased 160% after the project opened, according to the city’s Healthy Streets Pilot Evaluation Report (PDF). 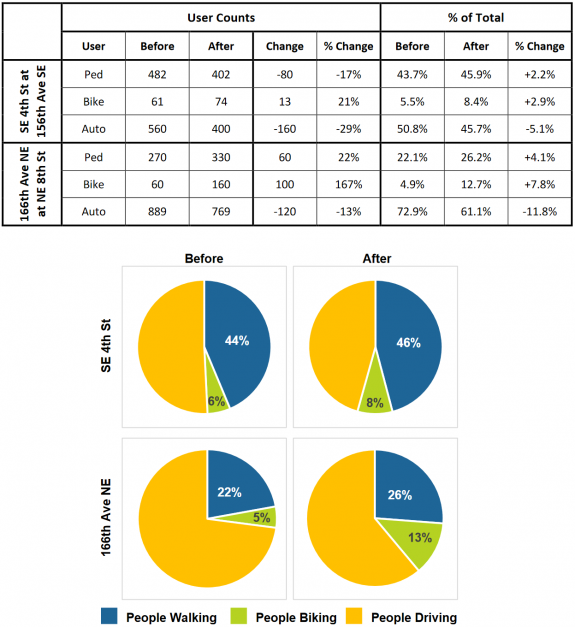 Neighborhood greenway options are more limited in suburban communities because so many developments have cul-de-sac designs that purposefully prevent through-traffic. It makes sense to take advantage of the greenway opportunities like this when they are available, but the bulk of the bike network is going to require bike lanes on major streets and trails. For example, the northern terminus of this route is Northrup Way, which has a skinny painted bike lane in only one direction. A lot more work is going to be needed to connect this route with other major bike routes, like the 520 Trail, or to connect to and through major business districts like Overlake Village.

But hey, do you have an opinion on how the traffic circles are painted? Well, you’re in luck. Bellevue wants you to let them know via this online survey. They’ve narrowed it down to these four concepts: 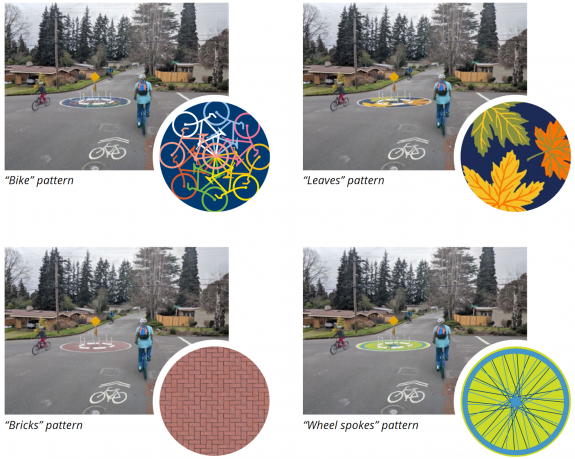 This entry was posted in news and tagged bellevue, neighborhood greenways. Bookmark the permalink.