The Northgate biking and walking bridge is an enormous undertaking. I-5 in this part of town is level with or even above street level, so the bridge needs to climb in order to get above and over the massive freeway. But it’s needed if Northgate Station is going to be able to reach people on the west side of the freeway.

Crews have been closing the I-5 Express Lanes for several days of intense work in recent weeks to install large structural elements that were constructed off-site. 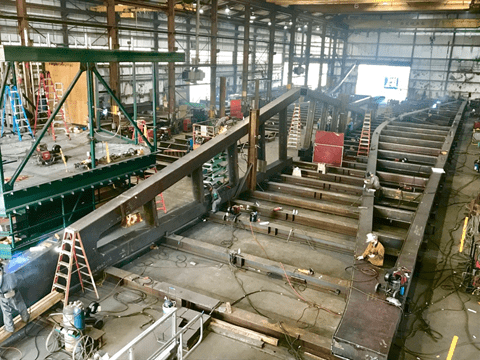 The project is still aiming for completion in fall 2021 in time for the opening of Northgate Station. A lot of things have had to come together to meet this deadline, and it’s great to see that goal seemingly within reach. It had to gather funding from the Move Seattle Levy, Sound Transit and the Washington State legislature in order to become reality.

It’s also becoming a symbol, at least for me, of a better future once COVID is finally behind us. Knowing that more Link stations are coming online later this year and that this bridge should be ready to greet the first passengers is really inspiring to me after such a dismal year. We still have more time in COVID protocols (especially us parents), but there is promise on the other side. Because of projects like this, which people worked so hard for in the last decade, our city will open up this decade in ways it never did before COVID arrived.

And for as much criticism as I send to Mayor Jenny Durkan, it is really cool that when this opens students will be able to use it to access two years of free tuition at North Seattle College thanks to her Seattle Promise program.

This bridge is going to need a better name. “Northgate Pedestrian and Bicycle Bridge” is way too long. I usually just call it the “Northgate Bridge,” but that maybe isn’t great because there is already a nearby I-5 bridge over Northgate Way. Maybe “Northgate Station Bridge?” Anyone have any other suggestions?

Here’s a video with some cool flyover footage of the area:

Founder and Editor of Seattle Bike Blog.
View all posts by Tom Fucoloro →
This entry was posted in news and tagged northgate, northgate station bridge. Bookmark the permalink.