As soon as Monday March 15, people walking, biking, and rolling on the Mountains to Sound trail at 23rd Ave S & I-90 will have a more circuitous detour as crews pave the east side of the 23rd Ave crosswalk and close the entire trail near the intersection. The entire sidewalk on the east side of the street will also be closed; people accessing the trail will have to use the alternate access points at 24th Ave S from the north and 25th Ave S from the south. 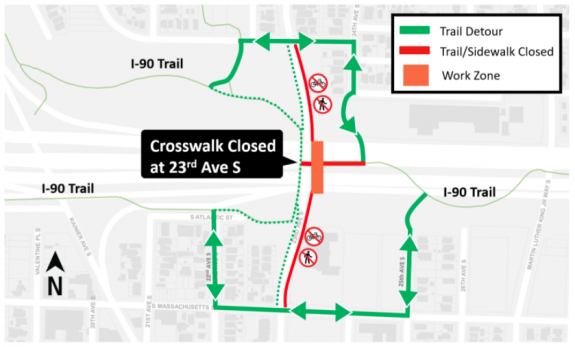 The Mountains to Sound trail detour at 23rd has been something that many trail users have been frustrated with for a while. Detour signage has been unclear, sidewalks that are supposed to accommodate people biking and walking along the detour blocked by no-parking signs, and ramps that could allow people to access alternate trail entries not in place.

We contacted Sound Transit about the persistent problems with the detour, and were told that the agency was working to implement improvements at the Mountains to Sound trail here this past weekend. Here’s what they said they are doing:

But the agency declined to tell us what was causing the failure to coordinate a legible and consistent detour at the intersection. The detour all the way to Judkins and Massachusetts Streets was communicated by Sound Transit as being in place only Monday through Friday 7am to 3pm, but has frequently been in place at nights and weekends. It’s also one thing to continue to maintain a parking lane that could be converted into a real detour; it’s another thing to pair that with next-to-no signage, and a crosswalk that people biking are sometimes able to use to detour into the street and sometimes cannot. Seattle Bike Blog readers have reported issues here going back through most of 2020. The bottom line is that Sound Transit should be better at this. 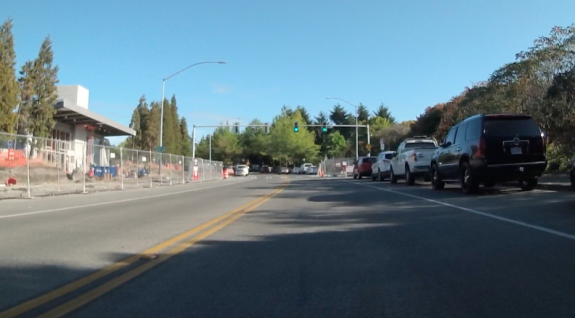 Photo submitted by Tonya Ricks Sterr showing the street space on 23rd that could be used for a bike detour in 2020.

The detour here will eventually return to normal, hopefully at the end of this month, but Judkins Park Station will retain several barriers to access. Natalie Bicknell at The Urbanist summarized many of those issues this week, with the I-90 access ramps feet from the Rainier Avenue station entrance at the top of the list. Theres still a lot of work to do to make this segment of Seattle more friendly to people who aren’t in a car.