Paulo Nunes-Ueno of Front and Centered at a Tacoma bus stop without a sidewalk.

At a press event in Tacoma at a bus stop next to fast-moving traffic, with no actual sidewalk available for people to use to access the bus stop, Disability Rights Washington & Front and Centered outlined their priorities today for the statewide transportation package moving through the legislature this year: “No new highways until we have sidewalks and reliable transit service”.

Paulo Nunes-Ueno, Transportation and Land Use Policy Lead for Front and Centered, the largest coalition of communities of color-led groups in the Pacific Northwest, identified the gravel-covered curb as “unfinished business” that Washington governments hadn’t prioritized in part because of the 18th Amendment to the State Constitution, passed in 1944, that ties the the state’s gas tax to highway projects. “The way we have funded transportation has left out too many people, most often people of color and poorer communities but also everyone who doesn’t drive”.

Krystal Monteros, Chair of Tacoma’s Commission for People with Disabilities, shared her experience living across the street from the spot where the event was held: “The sidewalk across from my apartment is still messed up”, limiting her movement. Disability Rights Washington has created an invaluable storymap talking to people in every legislative district in the state who can’t drive, sharing the stories of those vastly underserved by our transportation infrastructure currently. The map is an essential resource, particularly for lawmakers deciding where to allocate scarce dollars.

The press conference today comes on the heels of Governor Jay Inslee holding one last week with area leaders to push for a “maintenance first” transportation package. “We are getting our vaccines. Now we need to get our roads, bridges and ferries. All of these things are necessary for the rebuilding of Washington state’s economy. We need to make the investments first, and I emphasize first, in maintenance of our existing transportation system…it is woefully underfunded.”

But even a heavily maintenance-focused package in 2021 would not be putting maintenance first, after highway spending has ramped up steadily under the Governor’s watch. A chart from WSDOT Secretary Roger Millar’s State of Transportation address to the legislature this year showed more highway spending planned during the 2021-2023 biennium than ever before, with numerous mega-projects prioritized over preservation and maintenance. 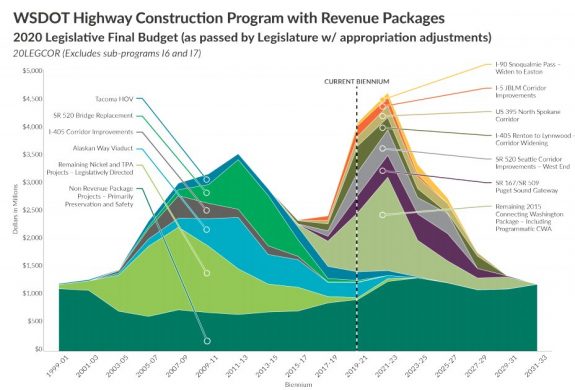 Highway spending planned by WSDOT by biennium. (Click to enlarge)

WSDOT’s active transportation plan, released in draft form late last year, outlined just how improvements to make our state highways usable for people who are rolling, walking or biking stack up against the spending we’ve already allocated to highway expansion projects. Roger Millar, at last week’s press conference, cited a $300 million price tag on the I-5 bridge over the ship canal to get the facility in a “state of good repair”; contrast that with a $283 million price tag to add speed treatments to every single state highway through a population center in Washington. Separated pedestrian and bike facilities everywhere come in at $1.8 billion, comparable to many high-profile highway expansion projects considered by the state in recent years.

Front and Centered and Disability Rights Washington’s call for no new spending on highways in Washington is a bolder request than we have seen from other transportation advocacy organizations in recent months. The Clean & Just Transportation Table, established by the Climate Alliance for Jobs and Energy, made up of 205 statewide orgs (including Front and Centered), and promoted by Transportation Choices Coalition, has highlighted the fact that Washington’s transportation spending is “inadequate, inflexible, and inherently inequitable” but has stopped short of calling for a moratorium on highway expansion. Alex Hudson, TCC’s Executive Director, signed onto a joint op-ed in the Seattle Times last month that left the door open to specific megaprojects: “Many larger projects, such as a new I-5 bridge over the Columbia River, an improved Highway 2 trestle in Snohomish County and repairing the West Seattle Bridge are also essential to congestion relief, safety and commerce.”

The Washington House Democrats‘ transportation package remains the most progressive proposal on the table, with billions more in spending for transit, bike, and pedestrian infrastructure than the state has ever seen at the state level. But it does include billions of dollars in new highway projects as well. Contrast that with the proposal Senator Steve Hobbs has unveiled as chair of that body’s transportation committee, which includes half as much money for multimodal priorities and billions more for highway projects.

With pressure from the Governor to get a transportation package, we should expect to see the committees scramble to assemble a coalition that can pass both chambers by the end of the legislative session on April 25.

Until every bus stop in our state is accessible, not a single dollar should go towards expanding highways. #MobilizeWA pic.twitter.com/uTHBwNuShs