The Seattle Department of Transportation announced today that as soon as Monday they’ll be starting work on the long-anticipated N 34th Street protected bike lane between Stone Way and Fremont Ave.

The immediate impact of this is a planned 3-week closure of the Burke Gilman trail between Stone Way and Troll Ave during which people biking will be directed to N Northlake Way. People walking and using wheelchairs on the Burke will be directed to the sidewalk on N 34th, according to SDOT. That sidewalk is incredibly narrow compared to the amount of pedestrian traffic in the area, so this detour will not be great. There will also be a 1-week closure after that diverting traffic from the sidewalk onto the Burke Gilman, which should be less impactful. 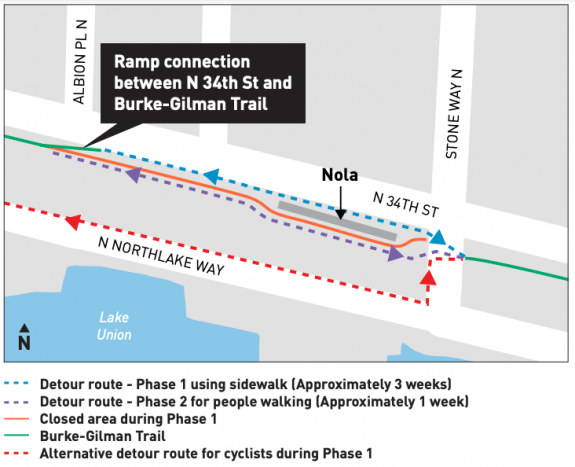 Map showing the planned detour of people biking on the Burke Gilman onto Northlake Way.

We are dividing the initial sidewalk work into two phases so that we can create detours for people in the area. The detour route will affect people walking, rolling, and biking at the intersection of N 34th St and Stone Way N. We are prioritizing the safety of pedestrians during this time.

During Phase 1, which begins as early as March 8 and lasts about 3 weeks, about 300 yards of the Burke Gilman Trail will be closed.

During Phase 2, which will last about one week following Phase 1, the sidewalk on the south side on N 34th St will be closed for about 300 yards.

People using the sidewalk will be directed onto the Burke-Gilman Trail. They can rejoin the sidewalk using a ramp to N 34th St 150 yards west of the work zone.

We’ve asked if there will be any separation on Northlake Way from traffic for people biking with kids and will update the post when we hear back. Update from SDOT:

We are not making changes to N Northlake Way during the detour period.

N Northlake Way is a relatively calm street, but we recognize that the Burke-Gilman trail is an all ages and abilities route attracting riders with a wide variety of comfort levels. We hope that riders will understand the challenges we face and that these detours are necessary so that we can build more protected routes and improve the bike network. 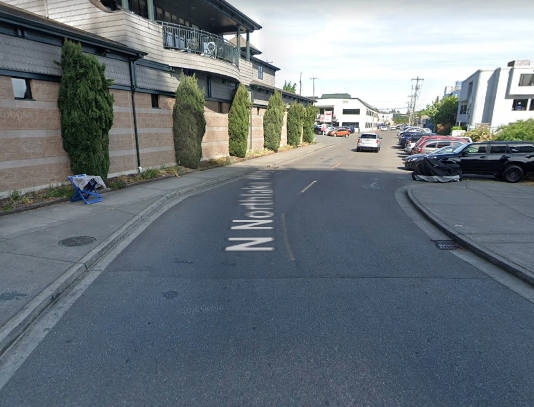 Northlake Way, the planned detour of the Burke Gilman for 3 weeks

When complete, the project will fill a noticeable gap in Seattle’s bike network for people biking between Westlake Ave, Queen Anne, and the heart of Fremont and the Burke Gilman heading toward UW. 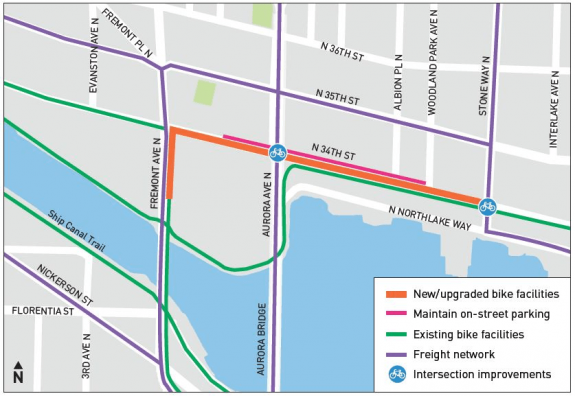 The design that SDOT is implementing sacrificed a lot of elements to accommodate the apparent needs of people driving in the corridor, and so may ultimately disappoint many who have been following the project for a while. It is exciting to see it finally implemented though.

Ryan Packer is Temporary Editor of Seattle Bike Blog.
View all posts by Ryan Packer →
This entry was posted in news and tagged burke-gilman, N 34th St. Bookmark the permalink.