UPDATE: the closure planned for February 5-8 is no longer happening due to a change in work. The highway will be closed but the pedestrian and bike trail will remain open. The next trail closures are February 26-March 1 and March 5-8. 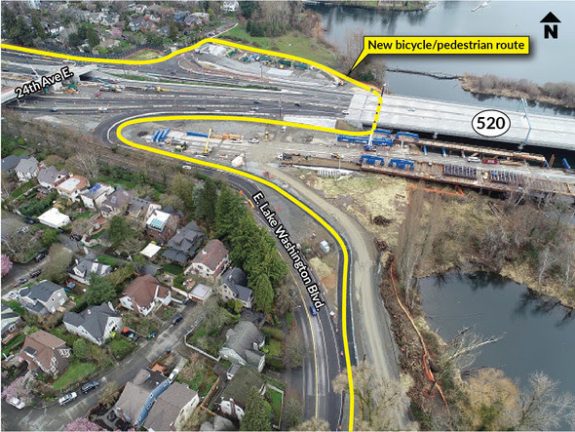 This connection will be closed for four weekends.

The Washington State Department of Transportation is starting work on installing the Montlake freeway lid this weekend, the first of four weekend closures that will close the bike and pedestrian path underneath 520 from Friday at 11pm to Monday at 5am.

Montlake Boulevard will be the primary choice for people biking to get between the Montlake Neighborhood and the Montlake bridge during the closure, though the Bill Dawson trail on the west side of Montlake Boulevard connecting to Montlake Playfield remains open. The pedestrian and bike trail across the lake adjacent to 520 will not close.

You can watch a video from WSDOT explaining the work they are doing to create a lid over 520 at Montlake.