Update: this post has been changed to clarify that any changes to Lake Washington Boulevard or Golden Gardens Park Road are not necessarily off the table but are not part of the permanent Stay Healthy Streets process.

A large majority of the membership of both the bicycle and pedestrian advisory boards on Wednesday night signaled to the Seattle Department of Transportation that they weren’t okay with a proposal to fund permanent improvements on 20 miles of Stay Healthy Streets by diverting funds from existing bike projects.

SDOT is asking to divert partial funding for 2.6 miles of neighborhood greenway projects, as we reported last month. The two boards asked the department to look for other funding sources. The decision ultimately rests with the Move Seattle Levy Oversight Committee, though presumably the opinion of the two modal boards will carry significant weight; the levy oversight committee will take up the issue in early February. The fate of the Stay Healthy Streets program if the request is denied is not yet clear.

In its presentation last night, SDOT’s neighborhood greenways program manager Summer Jawson, laid out the first steps that SDOT is taking this year to fulfill the promise made last summer to make twenty miles of Stay Healthy Streets permanent, but did not provide a huge amount of detail to the boards about what exactly those permanent improvements are going to look like. Those details will be worked out in through community outreach, she said. This was also another likely factor in the board’s vote not to okay the funding swap: it wasn’t entirely clear what the city will even be funding yet.

Ecoblocks, like the ones currently barricaded in front of two of Seattle’s police precincts, were suggested to be the most likely way that intersections along Stay Healthy Streets would receive protection. That’s likely to be the biggest line item for the projects.

Ecoblocks in front of the East Police Precinct.

The SDOT presentation included a variety of images of street treatments (most of which seem fairly temporary) and emphasized that they will be conducing more outreach than they “normally would do” on a neighborhood greenway project to receive a large amount of community buy-in to keep the program successful. The original Stay Healthy Streets, rolled out in the first month of the pandemic, were chosen as neighborhood greenways in part because some outreach had already been done when those facilities were installed. 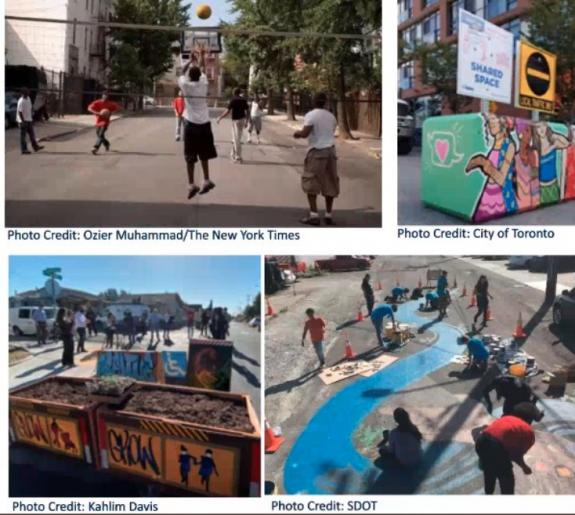 Jawson also announced that SDOT was prioritizing some new streets that have not yet been Stay Healthy Streets, including 0.7 miles in Georgetown, 0.4 miles in South Park (both neighborhoods currently dealing with a lot of cut-through traffic due to the West Seattle Bridge closure) and 0.1 miles in Little Brook in NE Seattle. These streets were prioritized based on concerns coming directly from community, she said. The South Park and Little Brook projects will include additional segments that only have neighborhood greenway treatments but aren’t Stay Healthy Streets.

In the next few months, SDOT will also be conducting community outreach to determine what the first current Stay Healthy Streets to be converted to permanent fixtures will look like. Those are the Greenwood SHS on 1st Ave NW, and the Alki Keep Moving Street on Beach Drive SW. Other Keep Moving Streets like Lake Washington Boulevard and Golden Gardens will not be considered for permanent status in the Stay Healthy Streets program, but may see changes via other avenues.

SDOT does appear to be moving fast to implement all of the 20 miles of permanent Stay Healthy Streets this year, but the potential roadblock on funding could slow them down. 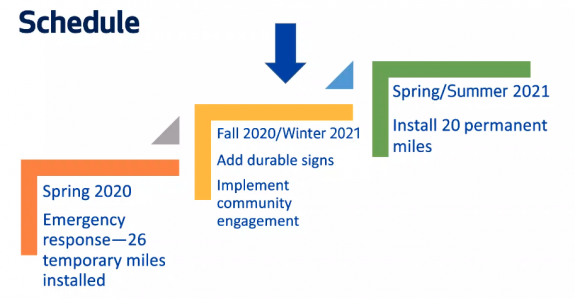 Also included in the resounding vote by the joint pedestrian and bicycle advisory boards was a sentiment they sent to SDOT that the more intensive traffic diversion treatments being considered for Stay Healthy Streets should become the de facto baseline with all neighborhood greenway projects. There was a general consensus that the approach being taken with Stay Healthy Streets should have been the approach with neighborhood greenways from the very start, even if that’s not immediately able to be implemented.

We should expect more information on which of the remaining Stay Healthy Streets (after Greenwood and Alki) are to be selected to get made permanent in the next few months.