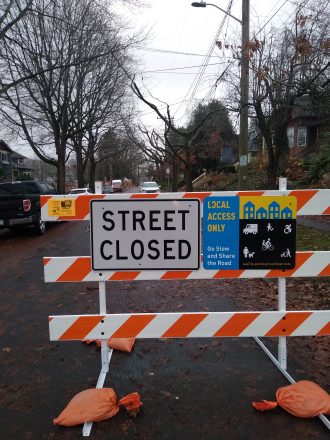 The Seattle Department of Transportation generated national headlines back in May with an announcement that it would be taking steps to make twenty miles of “Stay Healthy Streets” permanent. This big announcement that a chunk of Seattle’s neighborhood greenway network would get upgrades that make them more enjoyable and safer to use was cheered by many, and for good reason.
Seattle’s neighborhood greenway network has suffered from inconsistent standards, with little physical infrastructure that prevents people driving cars from utilizing them as an arterial alternative, and little accompanying pedestrian improvements.

But when that announcement was made earlier this year, we didn’t have a great idea of what those permanent improvements might look like, or what city funding would be used to make them. Last week, a city oversight committee was asked to approve a funding source for permanent Stay Healthy Streets: the existing bike budget.

In return, more than two and a half miles of new neighborhood greenway projects would lose construction funding. This would further reduce the amount of bike facilities installed over the life of the 9-year Move Seattle transportation levy. A recent report to the oversight committee listed fewer than 35 miles of either protected bike lanes or neighborhood greenways completed to date compared with the 110 miles that were promised to voters in 2015. The bike master plan program is expected to fall well short of its goal already.

The projects that would be defunded to pay for Stay Healthy Streets were listed in the memo:

Money would still be spent getting these projects “shovel ready” by funding them through the design phase, to perhaps be funded by council earmark or through the next transportation levy beyond 2024.

In order for this funding swap to occur, the levy oversight committee will need to sign off. There was no clear consensus at the meeting about doing so, with the representative for the Bicycle Advisory Board, Patrick Taylor, being pretty clear that he wanted the bike board’s opinion on the issue to be taken into consideration, and noting that they hadn’t been directly asked about the change. In January, the bike board will be holding a joint meeting with the Pedestrian Advisory Board and is expected to discuss the proposal then.

It may be hard to convince the oversight board to sign off on the proposal without a clear picture of what exactly the hardening of the Stay Healthy Street network will look like. But that will likely not be fully known until SDOT conducts the outreach that it wasn’t able to do in the lead-up to the initial roll out of the program.

Others might suggest SDOT find the money to fulfill its promise elsewhere: Gordon Padelford, executive director of Seattle Neighborhood Greenways tweeted: “Here’s a better way to fund [Stay Healthy Streets] next year: SDOT should charge SPD delivery costs and big rental fees for the eco blocks being used to armor police property”, referring to the walls constructed at both the west and east police precincts this summer. “Why? Those blocks were originally intended to upgrade and expand Stay Healthy Streets, and belong to SDOT”.

SDOT is still upgrading the current Stay Healthy Street network. After months of the barriers and signs along the Stay Healthy routes getting moved and run over by drivers, SDOT is slowly replacing the A-frame signage along the network with more durable, but still temporary, materials that are secured to the street. These include full Street Closed barricades at major intersections (as seen in the top photo) and smaller traffic barrels at minor ones. The funding for these improvements comes from the city’s COVID-19 response budget. 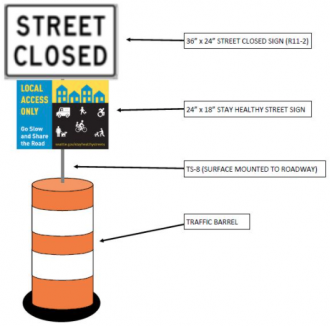 SDOT also noted in its memo to the oversight committee that any new neighborhood greenways that are installed in the future will also have an opportunity to become a Stay Healthy Street, which begs the question: is it really a neighborhood greenway if it’s not a Stay Healthy Street? The bar has simply been raised to a new minimum standard for neighborhood greenways that are safe for people to walk, bike, and roll on. But there is the small caveat that without the “street closed” sign on the block, it’s not technically legal to walk in the roadway. But the state legislature should take another look at that antiquated law that helps no one.

Next year it will be more clear exactly how the Stay Healthy Streets program will evolve, and where the funding will come from. What is clear it that there’s more momentum than ever for robust traffic calming on Seattle’s greenway network, which is a great thing to see. Turning that momentum into permanent improvements should definitely happen, but ideally not at the expense of other city goals.