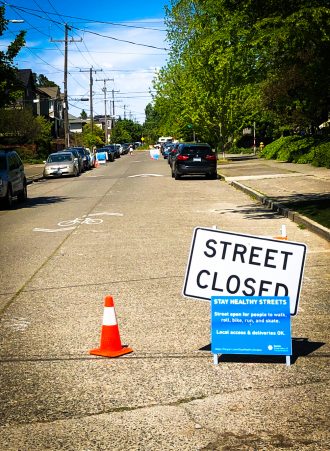 It made national news last week when Seattle announced that the Stay Healthy Streets (“SHS”) program would be transitioning from an emergency program to a permanent program. For example, a CNN headline read: “Seattle to permanently close 20 miles of streets to traffic so residents can exercise and bike on them.”

And yes, the Stay Healthy Streets are great. But I think some people may be a bit confused about what “closed” actually means here. Local traffic is still allowed, including deliveries, service vehicles and people accessing homes. And, of course, they only work so long as people choose to follow the rules. There is no physical barrier preventing someone from driving through, though that may be something the city should consider for some locations if the voluntary method does not work.

But at least so far, the signs alone have been very successful. Traffic volumes are down 91% on the Central District SHS compared to 2017 levels after the neighborhood greenway was installed. That 91% decrease far outpaces the the 57% decrease in overall car traffic since the outbreak began, a sign that the signs are working. 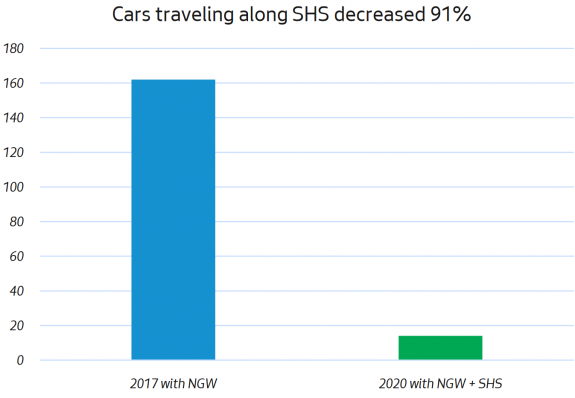 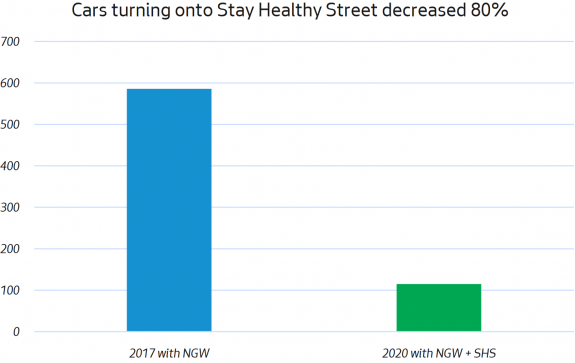 SDOT also found that the number of cars turning onto the SHS was down 80%, suggesting that people are mostly using the streets as intended: Turning down just the block they need to use and using a different street when possible.

And biking was way up on the street, nearly tripling the 2017 count. And that’s without a lot of commute trips, suggesting that a ton of people are using bikes just to get out of the house and get some exercise or fresh air. 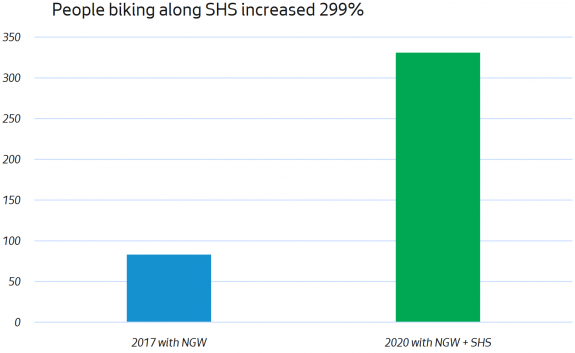 The number of people walking on the street decreased 28%, likely due to the decrease in commuting and transit use. However, the walking decrease was much lower than the driving decreases both citywide and on this street, so the SHS is still likely attracting people on foot. If anything, this number shows you just how effective the project has been at attracting people on bikes. 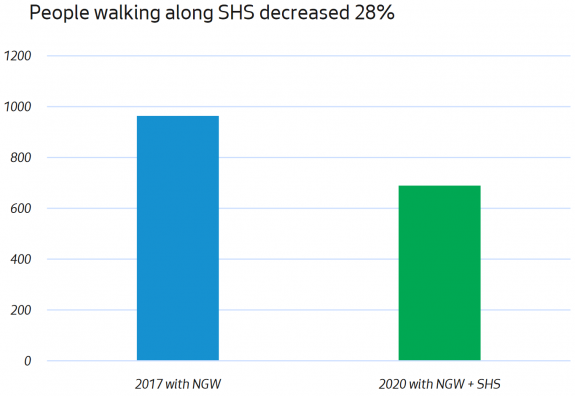 And, of course, it’s hard to say what success looks like for this program just by looking at charts. During the outbreak, the goal is to provide people with more space to walk and bike without getting in each other’s 6-foot bubbles. So you want them to serve people, but not so many people that they get too crowded. I would say they are hitting that confusing target so far.

But the streets are not only serving a purpose during the outbreak, they are also wise neighborhood greenway improvements for the future. That’s the way Mayor Jenny Durkan sees it.

“We are in a marathon and not a sprint in our fight against COVID-19,” said Mayor Durkan in a blog post. “As we assess how to make the changes that have kept us safe and healthy sustainable for the long term, we must ensure Seattle is rebuilding better than before. Safe and Healthy Streets are an important tool for families in our neighborhoods to get outside, get some exercise and enjoy the nice weather. Over the long term, these streets will become treasured assets in our neighborhoods.”

SDOT staff gave a presentation to the virtual Seattle Bicycle Advisory Board (PDF) last week, and they said the city is looking into their options for installing more permanent and durable signage and barriers. The city has also officially run out of Road Closed signs, so they will need to buy them going forward. And that means the program will have more costs associated with it.

Another important side note: The city is using “Road Closed” signs because that is the legal designation under state law that they need to use in order to legally allow people to walk in the street. Some people biking have said they avoided the streets because they thought “Road Closed” also applied to bikes. The city is adding more clarifying signage to make it clear, reading, “Street open for people to walk, roll, bike, run and skate. Local access & deliveries OK.”

Seattle Neighborhood Greenways has been working to gather community ideas for Stay Healthy Streets and encourage the city to install more of them. They recently put out a map of 130 miles of streets that they say could be a SHS or have a temporary walking and biking path installed. Cascade Bicycle Club has also noted them as one of its advocacy priorities amid the outbreak. Paul Tolmé wrote a story for the Cascade blog touring some of the Stay Healthy Streets and interviewing people using them.