During the last state legislative session in 2020, Steve Hobbs (D-Lake Stevens), chair of the State Senate’s transportation committee, released his latest version of the “Forward Washington” transportation package. The list of proposed projects to receive funding in the package totaled nearly $15 billion, and over half of that was proposed to go to “improving” state highways, not counting court-mandated spending on removing culverts statewide to improve fish habitat. That included dozens of projects with the sole purpose of expanding highway capacity, as well as projects like the $1.8 billion US 2 trestle rebuild that expand highways in the process of replacing aging infrastructure. It was not able to be passed by the end of the short legislative session.

The Seattle Times reports this week that Senator Rebecca Saldaña (D-Seattle,Renton) is proposing an alternate plan that includes fewer highway expansion projects and shifts dollars to more sustainable transportation investments. Most notably, it would include $2 billion for multimodal transportation grants, projects that are shovel-ready but haven’t been able to receive funding due to the heavy highway bias of statewide transportation spending.

The Saldaña proposal would span twelve years: evenly split among six two-year transportation budgets, that would amount to $333 million per biennium for transit, walking, and biking projects. Governor Inslee’s proposed 2021-2023 budget only provided about $115 million, even with a one-time $20 million boost to pedestrian and bicycle grant program. A $2 billion investment over 12 years would absolutely be the biggest multimodal investment that has ever been made at the state level.

The spending plan does include $1.4 billion for the US 2 trestle, a project in Steve Hobbs’s district that is clearly included in the package as a compromise, but projects like $259 million to widen SR-18 in Issaquah are not included and many other projects to expand highway capacity are absent. It also includes only $450 million for the I-5 bridge between Washington and Oregon; this is likely not going to be the full amount for the project if the latest version of the bridge includes as much highway expansion as the previous iteration, the Columbia River Crossing. Hobbs’s 2020 proposal would have allocated $3 billion for it. 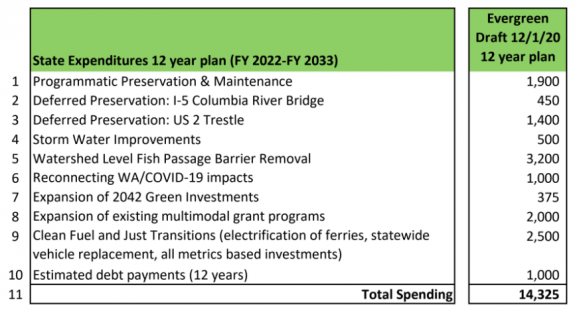 The Saldaña proposal acknowledges that we are currently underfunding badly needed local pedestrian, biking, and transit projects. Prior to the Governor’s extra funding being announced, WSDOT expected to only be able to fund 39 out of 232 projects that requested funding from either the Safe Routes to Schools grant program or the Pedestrian and Bicyclist program in the next two years. Local programs like this will make the difference in allowing people to make trips by biking, walking, or taking transit when they might not have otherwise. The shift away from focusing the transportation package on expanding state highway routes is huge.

Getting a proposal like this passed during the legislature’s first all-remote session will be a heavy lift, and it has to compete with a coming update to the Hobbs transportation package that will likely hand out highway expansion packages to nearly every legislative district at the expense of needed statewide active transportation investments. But the fact that a more progressive proposal like this is even in the mix at all is a huge win.

Ryan Packer is Temporary Editor of Seattle Bike Blog.
View all posts by Ryan Packer →
This entry was posted in news and tagged 2021 legislature, rebecca saldana. Bookmark the permalink.