From the beginning, Seattle ‘jaywalker’ stings were used to arrest poor people 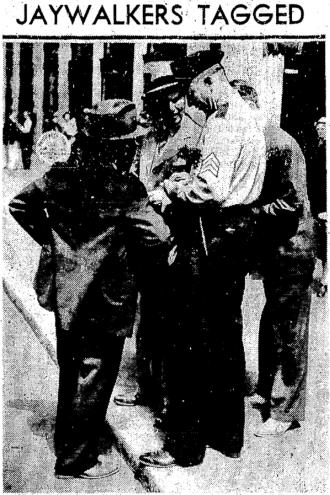 In the decade between 1924 and 1934, the number of people dying in traffic collisions in Seattle each year increased 250% from 48 to 121. About 70% of those killed were people walking.

By the end of the 1930s, Seattle decided that something needed to change. So the city’s Traffic and Safety Council partnered with the Seattle Police Department to crack down on bad traffic behavior as part of a major public safety campaign called “100 Deathless Days.” The city would publicly count the days between traffic deaths, encouraging everyone to work together to go a full 100 days without a single death.

They didn’t make it. And as each campaign ended with a death, they would start again from zero. And again. And again. As they reached their fifth campaign just five weeks after the start of the first one, they started to narrow their focus on the real problem: Jaywalkers. 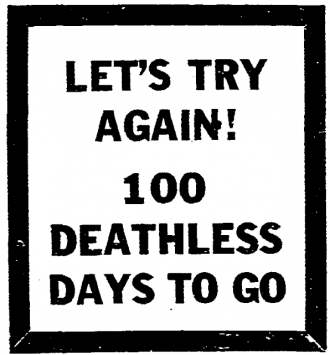 “We can’t have the rest of the year deathless if pedestrians are going to invite death by jaywalking,” Seattle Police Captain Joseph E. Prince told the Seattle Daily Times. He was preparing his officers for a major series of jaywalking stings during the summer of 1939, instructing officers that “pedestrians must share equal responsibility with drivers.”

The Seattle Daily Times ran a huge headline June 23 proclaiming “16 JAILED IN DRIVE ON JAYWALKERS!” It was the first highly-publicized jaywalking enforcement action, or “drive” as police called it back then. But dig a little deeper, and it starts to feel like maybe jaywalking wasn’t really the reason these particular individuals were stopped. The paper listed the names, ages and occupations of each person stopped. It also noted that of the 16 people arrested, only five were able to pay the $5 bail. Those who couldn’t pay were listed as “laborers” and had to stay in jail.

But incredibly, locking up poor people didn’t stop or even slow the steady stream of people being injured or killed by cars in Seattle. So they did it again a few weeks later, arresting 47 people this time. News stories refer to many jaywalking “drives” throughout 1939 and into the early 1940s.

But no matter how many poor people they arrested, the constant deadly collisions just wouldn’t stop. So Chair of the Traffic and Safety Council Earl F. Campbell decided it was time to get serious about the problem. Seattle needed more serious jaywalking penalties.

“We believe that an ordinance should be passed which will make possible just as high fines for careless pedestrians as are now given erring drivers,” Campbell wrote in an official letter to the Seattle City Council in 1939. “It must be assumed that some pedestrians are just as reckless as any driver ever could be.” The reckless walking charge would have carried the same serious penalties as reckless driving, including a maximum fine of $300 (about $5,600 in 2020 dollars) and ninety days in jail. Luckily the City Council did not take this part of the recommendation, though they did take the Safety Council’s advice and expanded the existing jaywalking laws to include all streets in the city rather than just in business districts.

But the new jaywalking law didn’t work, and neither did further jaywalking stings. And of course they didn’t because they were focused on punishing the victims of traffic collisions rather than trying to fix the core causes of collisions. In the minds of leaders at the time, people were getting hit because they made mistakes, not because the traffic system was inherently dangerous. If people walking were getting killed, then they must have been walking wrong.

By the fall of 1939, after a summer full of jaywalking stings and failed “Deathless Days” campaigns, Seattle Traffic Engineer J. W. Bollong had figured out the problem.

“These individuals do not realize how difficult it is for approaching drivers to see them during dusk and at night,” Bollong told the P-I in October 1939. “If the pedestrian is wearing dark clothing, less than 5 per cent of the light which falls upon him is directed back to the driver’s eyes. Yet the light returned to the driver’s eyes is all he has by which to see.” As Traffic Engineer, Bollong was perhaps the person best suited to do something that would actually make streets safer. Instead, he criticized Seattleites’ fashion choices.

Cracking down on jaywalking has always been an inherently misguided traffic safety strategy. But this non-solution to traffic collisions also had an awful side-effect. Because nearly everyone breaks jaywalking laws, officers enforcing the laws have very wide discretion about who they choose to stop. From the beginning officers targeted people inequitably, and the practice has continued to the present day. In 1939, 11 out of 16 people from one drive were presumably too poor to afford the $5 bail. In the 2010s, a disproportionately high percentage of jaywalking tickets went to Black and Native American people in Seattle. 26% of tickets went to Black people despite Black people making up only 7% of the city’s population, for example. Any traffic stop is an interaction that could escalate into violence or unrelated charges like drug possession, and policies like jaywalking or bicycle helmets expose people to biased policing. They are just a couple of the many entry points that inequitably feed people into the criminal justice system.

This is why many cities and even states are rethinking jaywalking laws altogether, as Streetsblog reported this week. Last year, Virginia changed its jaywalking laws to say that people shall cross at intersections or marked crosswalks “wherever possible.”

The Virginia law also explicitly prohibits police officers from stopping someone for jaywalking and throws out any evidence collected from an illegal jaywalking stop:

After at least 60 years of ineffective and inequitable jaywalking tickets, it’s long past time for Seattle and Washington State to reconsider the real impact of this law.

Founder and Editor of Seattle Bike Blog.
View all posts by Tom Fucoloro →
This entry was posted in news and tagged history, jaywalking. Bookmark the permalink.

2 Responses to From the beginning, Seattle ‘jaywalker’ stings were used to arrest poor people