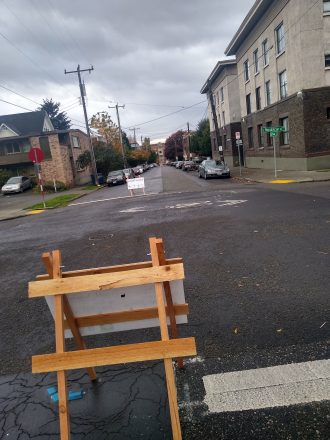 Street closure signs in place along 14th Ave in November.

Seattle’s network of Stay Healthy Streets, in place for most of this year on a portion of the city’s neighborhood greenway network, noticeably left out most of Seattle’s urban centers where a large proportion of the rental housing exists. Neighborhoods like the U District, Eastlake, First Hill, Northgate, South Lake Union, Uptown, and Capitol Hill either don’t have neighborhood greenways running through them or weren’t selected to be part of the Stay Healthy Street network.

The Stay Healthy Block program, similarly named but separate, was created by SDOT to allow “residents, community-based organizations, and non-profits” to close a neighborhood street to create more outdoor space. At the beginning of November, SDOT issued a permit to Capitol Hill resident Christopher Hoffman allowing “street closure” signs to be placed on a long stretch of 14th Avenue south of Volunteer Park. The area extended from Prospect Street to Olive Street, with a one-block gap in the middle to accommodate the Safeway parking lot.

Capitol Hill, pressed for open space in its densest segments, clearly had a pent-up demand for a space like this, and the street was an instant hit. All summer long, some residents had been daring enough to use the street to jog or stroll for a bit, but with the signs up the volume of pedestrians using the street skyrocketed even as temperatures outside went down.

The stretch of 14th Ave that was opened to walking, biking and rolling in November.

Unfortunately, the street signs also were instantly hit by cars, since their frames, provided by Seattle Neighborhood Greenways and not the city, were made of wood.  The signs were replaced multiple times, but not always right away, with broken signs often staying in the street for days. Some were clearly intentionally destroyed, with one “street closed” sign ripped to shreds.

This past Monday morning, under threat of fine, Hoffman removed all remaining signage from 14th Ave despite the recent announcement from the city that the Stay Healthy Block program would be extended until the end of February. SDOT has not officially extended the permit past the end of November, and it’s not clear that a new permit will ever be issued.

The primary issue with permit renewal is an odd provision of the Stay Healthy Block permit: SDOT’s rules only allow a street to be closed for twenty hours a week, though the times can vary but they can’t go past 9pm on any day. In other words, for the other 148 hours in a week, Seattle’s narrow sidewalks have to suffice if you like to use a Stay Healthy Block for exercise or transportation.

This contrasts with the Stay Healthy Streets, which clearly benefit from being 24/7 facilities. People driving have gotten used to not being able to use them as through-streets, though of course there’s a fair share of scofflaws and barricades hit by cars with that program as well. When a street closure is only in place for a few hours a week, at seemingly random times, how does that ensure compliance?

The limited hour restriction also places a hurdle to allowing a multi-block closure like 14th Avenue: SDOT is requesting that the barricades be stored off-street when the closure is not in place so that passersby (foot soldiers in the War on Cars, clearly) do not simply set the barricades back up. In the blocks where nearby housing is primarily apartments, people may not even have a place to store large street barricades. SDOT is requiring larger barricades at arterial street crossings as another condition for permit renewal. 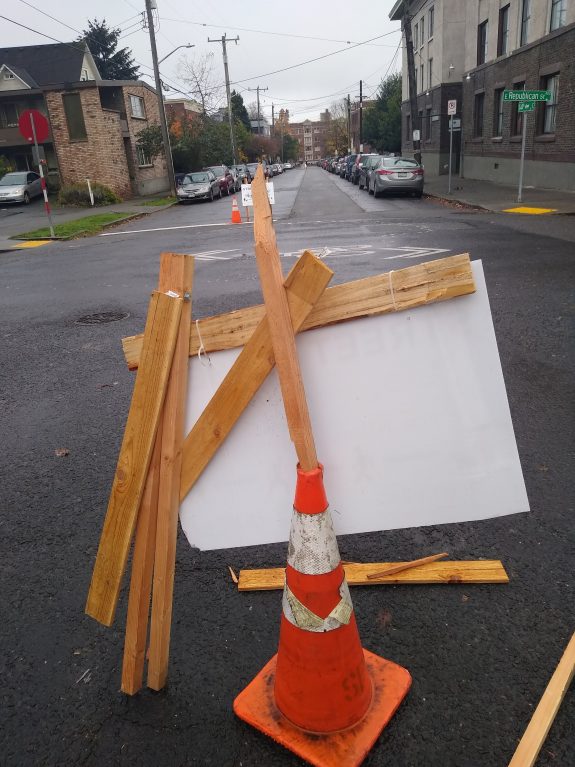 Ultimately, SDOT does not appear to have a way to create a facility that operates like a Stay Healthy Street, changing the way the street operates most of the time, even if operated by volunteer labor instead of SDOT staff time. But that may change.

SDOT representative Ethan Bergerson told me earlier this week, “We have been talking to Gordon Padelford [of Seattle Neighborhood Greenways] to discuss ways to address the concerns we’ve been hearing from everyone involved and figure out strategies we can take to support this particular Stay Healthy Block and also improve the program as a whole.”

If the Stay Healthy Streets program can’t be expanded to include all parts of the city, this could provide an alternate path, but only if the barriers to access aren’t so numerous and clearly disproportionate. In Capitol Hill at least, the benefit of this new amenity was clearly seen and appreciated, which hopefully can be a driver for positive change.

SDOT has an active survey on how to improve the Stay Healthy Block program, which you can use to send them feedback.