Some great news from Seattle Public Utilities: The Ship Canal Trail will not be detoured to Nickerson Street for the next couple years as was originally planned. As we reported previously, concerned neighbors including Queen Anne Greenways drew attention to a multi-year detour that would route the trail onto Nickerson Street, which has a paint-only westbound bike lane and no eastbound bike lane. This would have resulted in a huge reduction in the level of protection and comfort for users of the trail until mid-2023.

After neighbors voiced concerns, the two SPUs (Seattle Public Utilities and nearby Seattle Pacific University) and the contractor for this section of the massive Ship Canal Water Quality Project cancelled the detour and went back to the drawing board. And now they have announced their new plan: A very short temporary eight-foot-wide path through a parking lot adjacent to the work zone until summer 2022.

This is a great outcome, keeping the trail fully functional for the next several years. Big thanks to everyone who brought attention to the problem and to SPU for taking those concerns seriously, changing the plans and coming up with what appears to be a very good alternative. 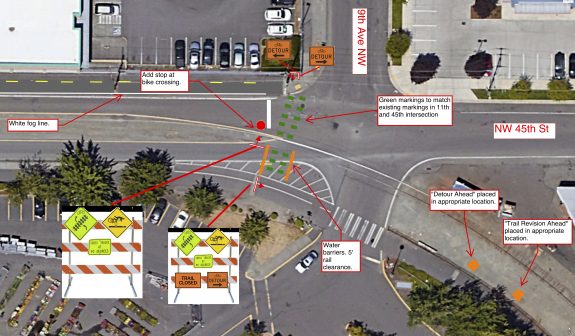 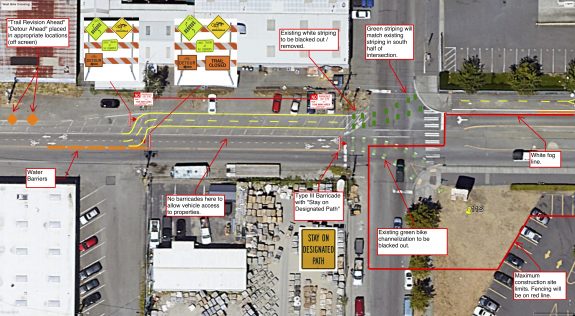 The same massive water quality project is also detouring the Burke-Gilman Trail near Fred Meyer in Ballard at the start of the Missing Link. Seattle Public Utilities has created a detour that crosses to the north side of NW 45th Street between 9th and 11th Avenues NW.

This means people will have to cross the notoriously dangerous railroad tracks two extra times when traveling through the Missing Link area. The design does seem to make attempts to cross the tracks at close to a 90-degree angle, but the devil is certainly in the details. The tracks are old with uneven gaps between the rails and the roadway surface, and a similar crossing near the Ballard Bridge continues to claim victims as trail opponents keep the city’s fix tied up in court.

I am of course hopeful that the detour works well, but I also hope that SPU and the contractor are prepared to quickly make adjustments and fixes as needed if it seems dangerous in practice.

For those new to biking, you never want to try to merge across embedded railroad or streetcar tracks because your wheel can slip into the gap and get caught. Sudden over-the-handlebars crashes are among the most dangerous kinds of non-car bike crashes. The tracks can even catch experienced riders because just the slightest misjudgment, like straightening out barely too soon and catching your rear wheel, can cause a bad crash. Even people who bike it every day sometimes crash on the tracks. My advice is to be almost cartoonishly deliberate when crossing. Go slow and swing wide so that you cross fully at 90-degrees with the tracks.

In East Ballard, near Fred Meyer, the Burke-Gilman Trail is detoured to the north side of NW 45 St between 9th and 11th Avenues NW. It’s important that bicyclists obey the signage as they approach the site and use caution when accessing the detour. Here are a few steps we’ve taken to try and make the detour as intuitive as possible:

Please see the attached traffic control maps for added details. This trail detour is expected to be in place through late 2022. 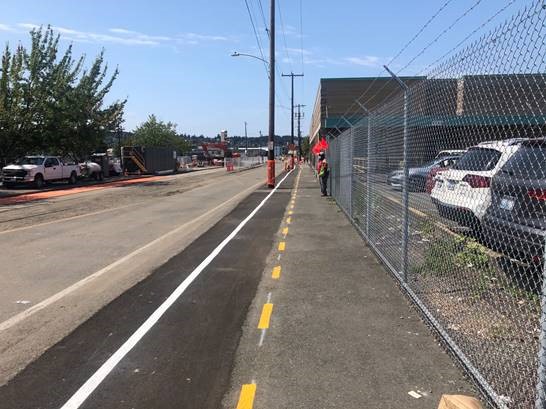 New path along the north side of NW 45th Street across from the Fred Meyer parking lot. Photos from SPU. 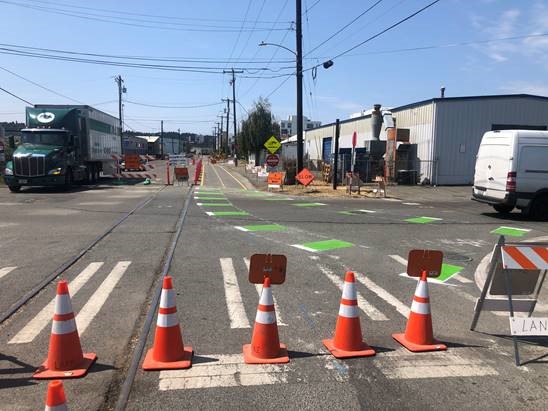