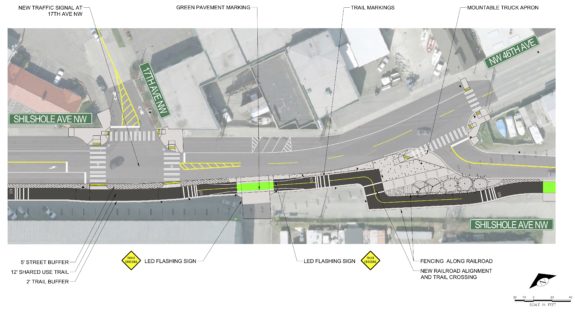 The city’s trail design would realign the railroad tracks. A court decision says the Feds have jurisdiction over such a decision.

Appellants fighting the city’s decades-long plan to finally complete the Ballard Missing Link of the Burke-Gilman Trail have successfully found another legal maneuver to further delay the needed safety project until 2022, the Seattle Times reports.

A King County Court has decided (PDF) that Seattle cannot redesign the railroad tracks along Shilshole Ave NW and NW 45th Street without first getting approval from the Federal Surface Transportation Board. Though the city’s planned trail route would not remove the mostly-abandoned (but still technically operational) railroad tracks, there are points in the current trail design where tracks would be realigned to make crossings work better. These rebuilt sections of track would be funded by the city, which owns the tracks, not the Ballard Terminal Railroad. The issue isn’t that there’s anything wrong with the city’s plan, just that they need another approval. And every new process opens more opportunities to find more technicalities to further delay the project.

This design was the result of a much-lauded “compromise” between many industrial leaders and trail supporters. Now details of that compromise has been used against the city to further delay the project. Every time the Missing Link comes up for debate again, people say, “Let’s just get trail supporters and opponents together at the same table and work out a deal.” So much for that. 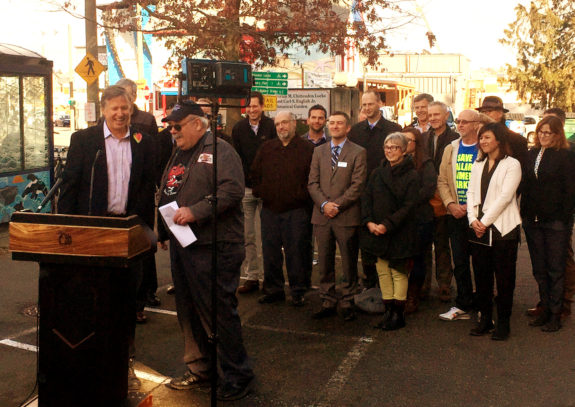 The City of Seattle will appeal the decision, saying it “could have concerning broader implications for public safety,” according to a statement (see full statement below). Cascade Bicycle Club, which has long championed the trail and legally intervened on the city’s behalf, put out a statement that the decision does not alter the fate of the project, but does add delay:

The June 25 decision by the Washington Superior Court does not change the long term outlook, and ultimate fate of the Missing Link being completed along the Shilshole route. The procedural decision pertains to identifying which entity has authority to grant or deny the City of Seattle’s request to vacate a small portion of the existing rail right of way. The City wishes to move this segment of railroad several feet to accommodate the safe trail. This rail realignment would be funded as part of the Missing Link project. This decision determined that the federal Surface Transportation Board must now make a decision. The result of this further delay is to perpetuate a hazardous traffic pattern on Shilshole Avenue that threatens the safety of cyclists, pedestrians and drivers.

We don’t see this ruling as slowing down the project long-term, but it does mean another delay to the safety of vulnerable road users along the Missing Link,” said Vicky Clarke, Policy Director of Cascade Bicycle Club. “The choice of Shilshole Avenue NW as the route of the Missing Link has been affirmed as the most simple, safe and connected route. This evaluation is one that experts agree on, the community wants, and that we support for just those reasons.”

The appeal joins two other ongoing legal processes, including one case in front of the Washington Shorelines Hearing Board and a case to resolve one detail from the city’s massive Environmental Impact Statement. None of the challenges are about anything of substance. They are all technicalities.

The Shorelines Hearing Board ruled in January (PDF) that the city’s “Substantial Shorelines Development Permit” for trail construction was invalid because it only applied to the section within the Shoreline District. The city did not include the full project in that permit because it claimed an exemption in the code written for “linear transportation use.” The crux of the decision revolved around the definition and intent behind the “linear transportation use” phrase, which the Board deemed only applied to light rail, not a trail. So the city already had a permit that covered work within the Shoreline District, but now needs to get a new permit from the Shoreline District that also covers work outside the Shoreline District. This is legal obstruction for the sake of legal obstruction and wasting money. There is no argument of consequence or substance here. This has nothing to do with protecting the shoreline.

We have already reported exhaustively about the city’s multi-year, 829-page environmental mega study, which the city was forced to complete following previous successful legal actions by appellants. King County Superior Court found that they city’s study had not adequately addressed the potential for increased insurance costs to businesses even though the trail is a safety project that should, if anything, decrease the likelihood of a business causing injury. The city also conducted an economic analysis and could not find any cases of a trail causing nearby business insurance costs to rise. The argument here isn’t about whether the trail will increase insurance costs (it won’t), it’s about whether the city’s study showing that it won’t do so should have been in the 829-page environmental study when it was released back in 2017. The city is appealing the decision, which would require them to re-release an amended version of their environmental study and go through the whole public comment and appeal process all over again.

We’ve been fighting about this trail for so long, it’s becoming hard to imagine a world in which we aren’t fighting about it. Meanwhile, the neighborhood is put in an incredibly awkward position because work to build a major section of the trail from the Ballard Locks to 24th Ave NW is largely complete. Yet because of the legal limbo, the city can’t actually make it a trail. So there’s this trail-like stretch of extended sidewalk space without the elements that make it a safe and full-functional trail. And of course since this project aims to fill a huge need for a safe bike route here, people are already using it (it is legal to bike on the sidewalk, so I guess it’s just a big sidewalk now). It’s absurd to require this state to continue while the appellants find technicalities to use to delay completion. This is not good for the neighborhood, it’s not good for businesses and it’s not good for people walking and biking.

None of the legal fights are about anything of real substance. All the real questions about things that affect people’s lives have been answered for years. It’s just arguments about technicalities and semantics, exploiting laws written to prevent environmental damage from huge projects (like freeways, shipping terminals and light rail) and applying them to a biking and walking trail where they simply do not fit. This case needs to be the foundation for a change in state law to exempt trails and other walking and biking safety projects from these environmental regulations. Or at least they should have regulations sized to fit them properly.

Biking and walking projects do not have the budgets to get through this process. A multi-billion dollar freeway project can easily afford all the mega studies and legal fees to fight through all this stuff. Seattle cannot afford to do this just to build 1.4 miles of a bike trail that gets massive amounts of use and serves vital transportation, recreation and safety functions. It has taken a lot of work by advocates and city leaders to keep funding the effort to build this trail, but the price tag is absurd because of these legal challenges. State leaders cannot let this happen again.

These laws intensely scrutinize projects, but not the status quo. People keep getting injured while biking the trail gap between Fred Meyer and the Ballard Locks. Real people’s elbows are being shattered as they crash trying to cross the tracks. And we have the designs and the funding to fix the problem, but we can’t because some appellants want to argue about the meaning of “linear transportation use” in a code governing the extent of project details necessary in applications for a permit to work in a designated Shoreline District. It would be funny if people weren’t getting hurt by these delays.

More details on the city’s intent to appeal from SDOT:

We respectfully disagree with the Superior Court’s decision which challenges our ability to successfully manage the public right-of-way for the health and safety of the traveling public. This decision could have concerning broader implications for public safety, and we plan to appeal the matter to the Court of Appeals which is already considering a related case about the Burke-Gilman Trail. Completing the Burke-Gilman Trail Missing Link is one part of a larger Ballard Multimodal Corridor project which also includes roadway paving, new sidewalks, storm drainage, and signal improvements. These critical changes have been repeatedly delayed due to ongoing legal challenges. SDOT believes that the project Final Environmental Impact Statement (FEIS) demonstrates that the planned trail alignment provides the best public safety option while also mitigating potential impacts to businesses. We will continue to pursue resolution through the courts rather than compromising public safety with an inferior alternative route. SDOT’s recent work on Phase 1 of the Ballard Multimodal Corridor project (between the Ballard Locks and 24th Ave NW) did not include any of the features, signage, or markings planned for the Burke-Gilman Trail. Now that most aspects of Phase 1 construction of the Ballard Multimodal Corridor project unrelated to the trail have been completed, we do not anticipate beginning construction on Phases 2 or 3 until late 2021/early 2022 at the soonest as a result of ongoing court proceedings, with possible further delays due to this latest court ruling.