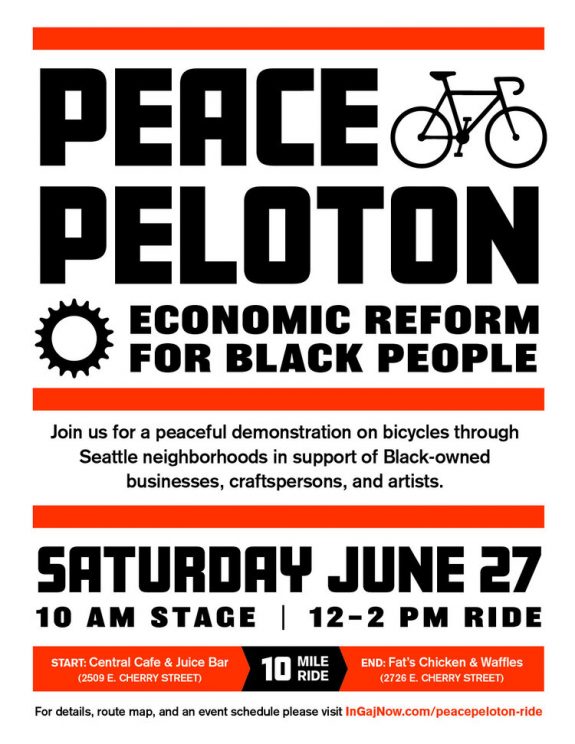 The third Peace Peloton ride meets 10 a.m. Saturday at Central Cafe and Juice Bar in the Central District. At noon, the ride will travel ten miles before ending at Fat’s Chicken and Waffles. If you plan to attend, fill out their RSVP so they can tell businesses how many people to expect.

This ride demonstration will be a casual, no drop, round-trip, supported journey through Seattle neighborhoods totaling about 10 Miles with approximately 600 feet of elevation gain. To help expedite the purchase process, please bring cash.

You can support the Peace Peloton financially in person or by donating to paypal.me/InGajCycle. You can also sign up to volunteer.

Peace Peloton organizer Doc Wilson spoke with Paul Tolmé at Cascade Bicycle Club about the genesis of the rides and why they are focused on economic reform:

“For criminal justice and policing reform we need to wait for government action. Same for health care reform, and many other issues where we need government action, which can take years. But we can do economic reform right now. In its simplest and most direct form, economic reform is me reaching into my wallet and taking out $10 and spending it at a Black-owned business. We want to mobilize people on bicycles to do something right now. We have been asking and waiting and being patient for a long time. We don’t want to wait anymore.”

Wilson also had some advice for Cascade:

“I think Cascade would resonate if they brought on more diverse people. I’m talking about stepping up your recruitment efforts and bringing on Black and brown people who are talented. You are having all these diversity and equity meetings. Hire some well-qualified Black people. Let’s all be invited to the table. Some Black people in the cycling community are not very happy with Cascade. You should have done it years ago. Now it doesn’t seem legitimate. Black people are tired. We are sick and tired of being treated like second class citizens. We are sick of white people asking us what they can do when they know what they can do.”