The Seattle Bike Brigade keeps protests safe, but doesn’t want the spotlight … so why am I writing about them? 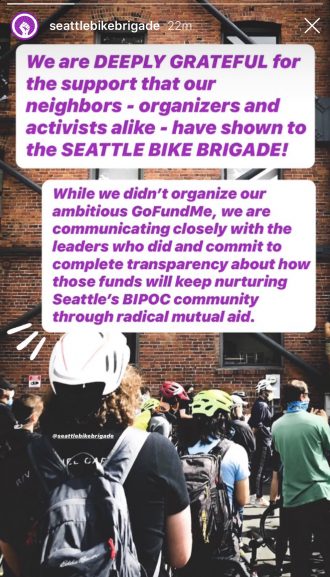 The Seattle Bike Brigade has been serving an important supporting role in recent protests, helping to control traffic and form barriers when needed to create and protect space for protests and keep people safe.

WE DO share clear info that supports and follows trusted Black leaders calling to defund police as part of an abolitionist framework, maintain the pressure and momentum of this movement, and prioritize protecting BIPOC bodies (especially youth).

WE DON’T work with police, spread misinformation, or talk to the press. If tactics in the streets become escalated, we ensure BIPOC bodies are protected and not left vulnerable.

We also organize horizontally with other organizations because collaborative, decentralized movement can effectively take advantage of the energy, militancy, and momentum of this movement while still protecting BIPOC leadership. Email [email protected] if you have connections we could share!

(Wondering why we support defunding the police? Find out more at bit.ly/sbbdefund101)

In some ways, they are pulling tactics long used for large bike rides like Critical Mass, such as corking intersections ahead of marches to prevent people from trying to drive where people are marching. By stopping in front of car traffic, they remove any doubt that the road is closed. They can also quickly form a barrier if needed for any reason, whether to protect the rear of the protest group or to help create space between protesters and a militarized police line.

But while the Brigade isn’t seeking attention, many protesters and organizers have recognized their work anyway.

These bikers have been keeping us safe! Let’s make sure they can eat, pay rent, and buy equipment. They are literally putting their bodies on the line and proving we keep us safe. https://t.co/CdZId8KaEu

Unfortunately, there are still people who are willing to use their cars as weapons to threaten or attack protesters. And because the Bike Brigade creates the barriers for the protest, they are the first people a violent driver will encounter. Jessie McKenna wrote a story for the South Seattle Emerald about one scary attack during a June 10 youth march downtown:

At approximately 6:45 p.m. on Wednesday, June 10, a man reportedly drove his car into cyclists in front of youth protesters gathered in the street outside of the Seattle Police Department’s West Precinct, causing minor injuries and destroying at least one bike. Seattle Bike Brigade cyclists, there to protect protesters, threw themselves at the car in an attempt to stop it, and one of them reportedly threw his bike under the front of the car in a last-ditch effort to slow it down. A partial video of the event was posted to Facebook by Ben Crowther.

The incident reportedly left some with scrapes, but the most physical damage done was to a bicycle caught in the car’s undercarriage — as the driver continued on and pulled into a parking garage on Ninth Avenue just south of Virginia Street — and to the back window of the vehicle itself, which was busted out in the altercation between car, bodies, and bikes.

Following that incident, the Seattle People’s Party organized an online fundraiser for the Bike Brigade to help raise money to support their efforts and to fix or replace damaged bicycles. That fundraiser, promoted online by former Seattle mayoral candidate Nikkita Oliver, has raised more than $34,000 at the time of publishing this post.

So yes, the Brigade is getting time in the spotlight they aren’t seeking, and I know me writing about them is not helping that. But they have been one part of what has helped Seattle’s current protest movement become as successful as it is, and I think there are probably people in a lot of other cities who could organize similar efforts. So sharing their basic tactics and their efforts to purposefully center the protest rather than themselves could be useful or inspiring to others.

The Brigade posted on Instagram that even though they didn’t organize the fundraiser, they are talking about how to transparently use the funds to support their work and the protest movement: 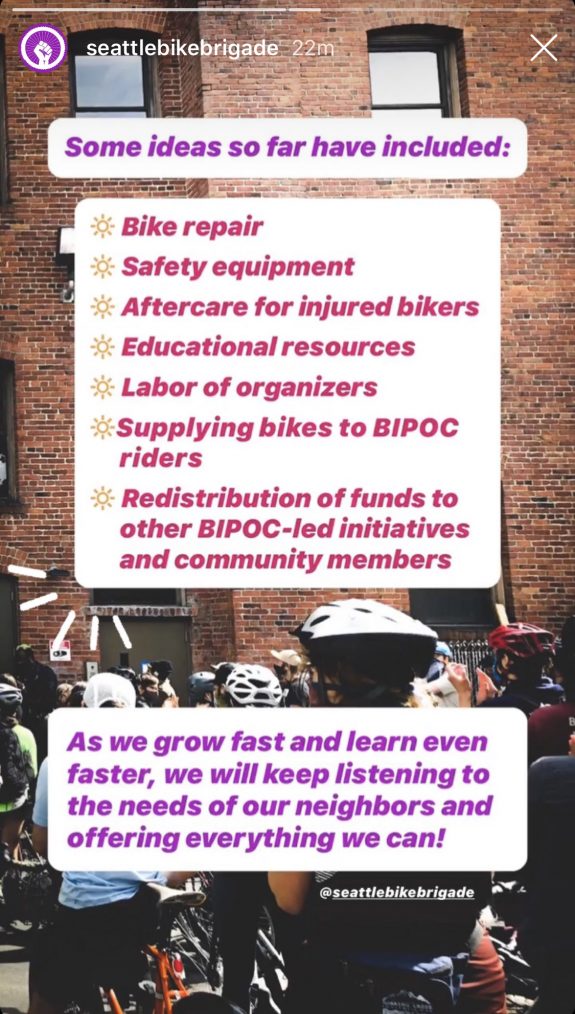 As a side note, I know many Seattle Bike Blog readers have participated in the Brigade. Thank you. And thanks everyone who continues to join or support the protest efforts however you can. I have not written about anything other than the protests since they started in late May, and not a single reader has pushed back or told me to “stick to bikes.” I have also not lost any advertisers, and the reader supporter level remains consistent. That tells me that the community that has grown with Seattle Bike Blog over the past decade supports and demands change. No justice, no peace, no racist police. There’s no going back from here.

2 Responses to The Seattle Bike Brigade keeps protests safe, but doesn’t want the spotlight … so why am I writing about them?