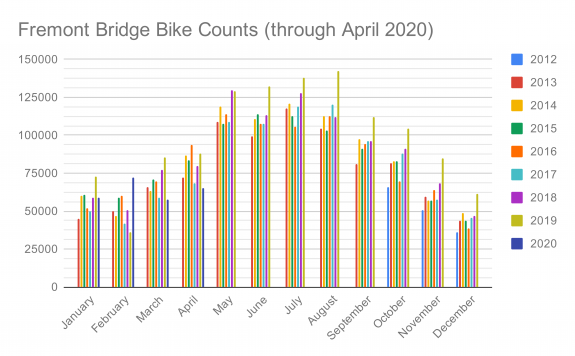 The number of bike trips across the Fremont Bridge in February was 47% higher than the February average from 2013-19, continuing a trend of strong year-over-year bike trip growth in recent years.

But then March happened, and employers shut down offices and fired workers. Unemployment skyrocketed along with working at home as our city attempted to slow the spread of the coronavirus that causes covid-19. And you can easily see this all play out in different ways through the data collected by the city’s 24/7 bike counters. I taught myself some new spreadsheet tricks and reorganized my bike counter data system, so I have a bit of new data to share.

Let’s start with the Fremont Bridge, typically the busiest single crossing point for people biking because so many different local and regional bike routes funnel to this single crossing of the Ship Canal. As we reported earlier this year, the bike counts across the Fremont Bridge completely shattered all previous records in 2019. It wasn’t even close. 2019 counts passed the all-time record for bike trips in a single year just a week or so after Halloween, and the counts did not slow down after that.

Then people started dying of covid-19, and we realized the virus was already here. As society completely reorganized itself, the way we typically gauge bike use became obsolete over night. The Fremont Bridge bike counts plummeted because commute trips, especially trips headed downtown, plummeted. The fall was not as precipitous as the fall in car trips, which were down more than 50% in Seattle, but the shift from a 47% increase in February to an 18% decrease in March is symbolic of how quick and difficult the shift to life under lockdown was.

To top it off, the Fremont Bridge is almost exactly the kind of bike route you want to avoid right now if you can. Its very skinny sidewalks make it impossible to maintain at least six feet of separation from others. So unless you need to cross the bridge, you probably shouldn’t (or you should at least be patient and wait for the path to clear out before crossing).

But Fremont never told the whole story of biking, it was just our busiest counter. And looking at other counters or focusing on weekend trips vs weekday trips, and you start to see a very different story about the role bikes are playing during the outbreak. For example, the reduction in commute trips brought the Fremont Bridge bike count down 18-20% compared to the average, but weekend trips were up an astounding 71% in April. Though it’s far from exact, weekday counts tend to be more commute-dependent and weekend counts tend to be more recreation-dependent. So clearly, there has been an enormous boom in the number of people using bikes to get out of the house, have some fun and get some much-needed exercise. 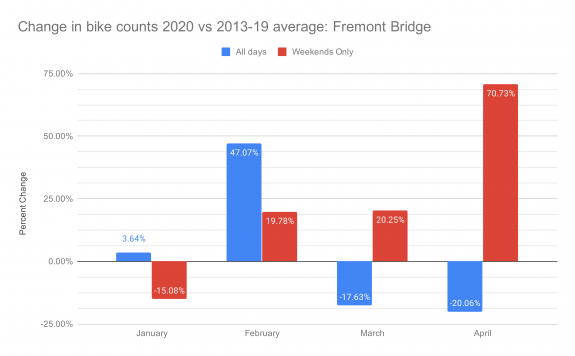 Seattle was already experiencing a historic biking revolution before covid-19 came to town, but bike sales have gone through the roof nationwide since the lockdown hit. People are looking for healthy and responsible ways to get outside, get around and get some exercise. And many people are trying to avoid taking transit, but can’t or don’t want to spend their tight budgets on the many costs of car ownership. So bikes are filling many different places in people’s lives, whether they are essential workers trying to get to work or people getting cabin fever at home.

Let’s look at the Elliott Bay Trail in Myrtle Edwards Park. This trail does carry commute trips to downtown, but it also serves as a major recreation route for people looking for a lovely bayside bike ride. Bike trips were also way up before the outbreak, clocking in at 45% above average in February. But even when workplaces shut down, bike trips have remained well above average. Oddly, weekend counts dipped in March before rebounding in April. 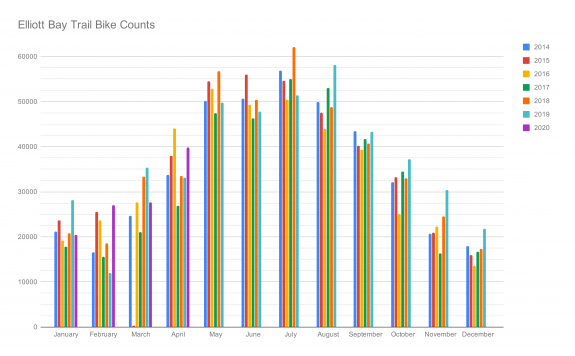 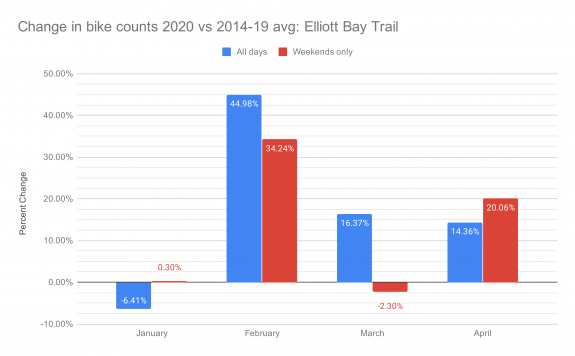 Similarly, the Burke-Gilman Trail at NE 70th Street, beyond the primary Magnuson Park entrance, also shows continued growth in ridership even after the outbreak hit. In fact, biking counts were growing faster in April than they were in February. Because the counter is located north of most of the trail’s major destinations within Seattle, this counter likely captures a more recreational pattern than if the counter were located on busier sections like UW campus or Wallingford. 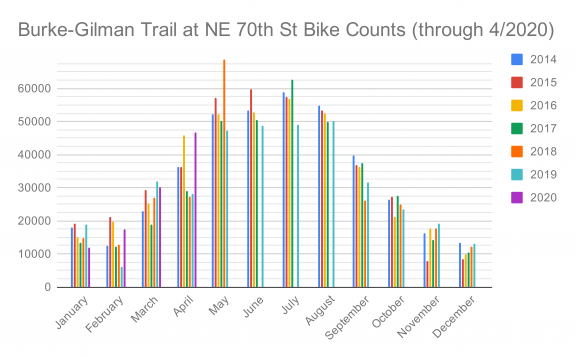 Note that the counter was out of commission during the summer of 2018. 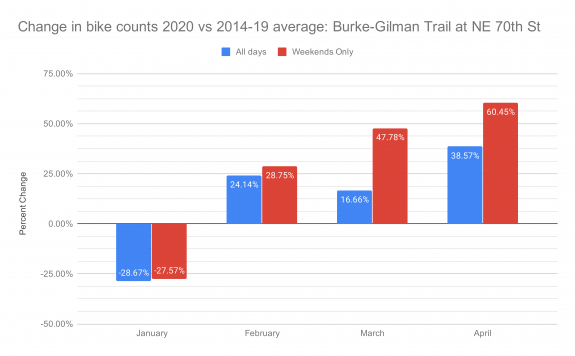 When you consider the massive drop in car trips during this time, the results of these counters are remarkable. But it isn’t a huge surprise if you’ve been following bike industry news. Sales of bikes are through the ceiling all over the world, and Seattle is no different.

“The demand we’re seeing now and the increase in business is unlike anything we have seen in our history of the company. I mean, April and May have been busier than any month than we’ve had in our ten years we’ve been a bike shop,” Bill Brown, Ride Bicycles Sales Manager said to KIRO 7 News.

In fact, stores and distributors are running out of bikes to sell, a problem that is likely to persist through the summer. We are going to need to get creative about how to help our community members get bicycles, especially because they are running out of the lower-cost options first.

As with all our posts about the city’s bike counter data, there is a big blind spot in south Seattle. There is no bike counter providing a quality snapshot of biking trends from Rainier Valley or South King County. That needs to change.

My new system for tracking bike counter data will also be much easier to update as monthly data drops come in (basically, I learned how “SUMIFS” formulas work and, yeah, they are real time-savers). You can view or download the spreadsheets yourself if you’re into that kind of thing. I’m also open to feedback on how to organize them better. Email [email protected].

The Spokane Street Bridge bike counter also has some interesting data since the West Seattle Bridge closed. Stay tuned for a separate post about that.