With sales projected to keep rising, what more e-bikes could mean for Seattle

EDITOR’S NOTE: This story is by Conor Courtney through our partnership with UW’s Community News Lab journalism course. 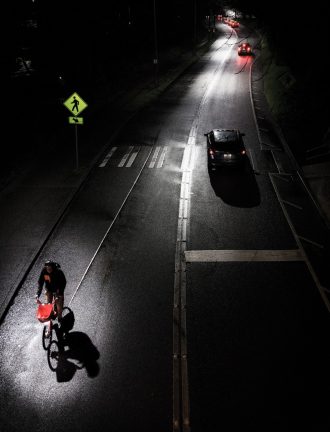 A cyclist on a pedal-assisted Jump bike passes cars near the University Bridge. Photo by Conor Courtney.

Seattle cyclists can expect to see a substantial increase in the number of riders zipping around the city on pedal-assisted e-bikes in the next few years, according to an industry forecast by consultants at Deliotte.

Internationally, the number of e-bikes in circulation in 2023 will reach 300 million, up 50 percent from the number currently in use, according to Deloitte’s projections.

This increase in cyclists will bring significant benefits to the Seattle community, according to Kristi Straus, a lecturer in the University of Washington’s College of the Environment who teaches a course focused on personal and societal sustainability.

Viewing sustainability as an intersection between the environment, economy, and society, e-bikes help all three, says Straus. Cycling to your destination can often be faster than driving, especially in Seattle, which traffic analytics company Inrix ranked the sixth most congested U.S. city in 2018.

“E-Bikes are awesome, and can be a stepping stone for people who otherwise might not choose to bike or be able to bike the distances or hills that they’re now biking with e-bikes, and more e-bikes is likely to increase bike infrastructure and benefit all people in Seattle, not just all people who bike,” said Straus.

“I think that e-bikes make a big difference for folks who are a little bit older, who aren’t as strong as they used to be,” said Clara Cantor of Seattle Neighborhood Greenways. Cantor also says that e-bikes make it easier for community members with chronic pain or other disabilities to have a reliable, healthy transportation option.

E-bikes have been steadily dropping in price over the last few years, with an average e-bike costing around $1,000 today, making them more affordable for many families looking for another transportation option.

From an environmental standpoint, e-bikes also provide a huge benefit for communities.

Project Drawdown ranks e-bikes as the #69 most viable global climate solution, ahead of recycling paper, trains, green roofs, and ridesharing. The research organization projects the net savings from electric bikes as $226 billion compared to a net cost of $106 billion.

Cantor also noted that the majority of trips people take are within a 2- to 5-mile radius of their home, a distance that is often too far to walk, but perfect for cycling.

But there’s still problems to solve as the number of cyclists is expected to increase.

“The more people we have riding bikes the more places we need for riding bikes, and that includes protected bike lanes and trails all over the city connecting all of our neighborhoods together,” said Cantor.

This projected rise follows years of e-bike popularity in Europe and China. In the Netherlands, the majority of adult bikes sold in 2018 were e-bikes. In China, 32 million e-bikes were sold in 2013, compared with 1.8 million across all of Europe, according to Forbes.

Locally, Rad Power Bikes CEO Mike Radenbaugh said the Seattle company’s e-bike sales more than doubled between 2018 and 2019 in an interview with the Seattle Times in January.

Andrea Learned, an independent climate action leadership strategist and e-bike advocate, also pointed to e-bikes’ value outside of cycling for commuting or fun.

E-bike companies will cash in on the projected $20 billion in sales revenue according to Deloitte’s projections, but they’re not the only businesses benefiting from the bikes. Businesses from local shops to giants like Amazon and Domino’s are increasingly turning to e-bikes as a way to deliver products quicker and cheaper.

“The bottom line,” said Learned, “is that we have to see e-bikes as transportation and last mile delivery.”

Conor is a senior at the University of Washington studying Journalism with a focus in photojournalism and Environmental Studies. His work has appeared in The Seattle Times, KOMO 4 News, and The Daily of the University of Washington. Conor is particularly passionate about covering environmental and outdoors issues. His work can be seen on Twitter and Instagram @conor_courtney.
View all posts by Conor Courtney →
This entry was posted in news and tagged andrea learned, clara cantor, e-bikes, kristi straus, news lab. Bookmark the permalink.

15 Responses to With sales projected to keep rising, what more e-bikes could mean for Seattle