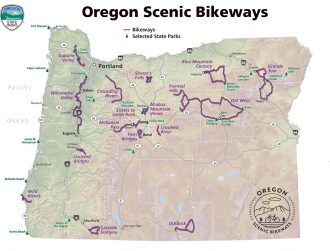 Washington is full of scenic places to bike, so it won’t be hard to identify a network of amazing routes to promote as part of the proposed Scenic Bikeways program that just passed the House 96-1.

Oregon has long has a scenic bikeways program, and they have successfully used the program to promote bicycle tourism all over the state. This supports local economies and encourages more people to try a bike adventure.

The HB 2587 is now sitting in the Senate Transportation Committee. It needs to pass out of the committee, pass the full Senate and then resolve any differences before going to the governor’s desk for a signature. Washington Bikes is advocating for the program this short legislative session, and they provided a little background in a recent blog post:

How the Scenic Bikeways program would work: