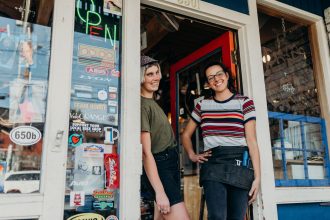 One Seattle shop was far and away the top-rated bike shop in the SPLAIN survey: Free Range Cycles. The shop in its iconic little building in Fremont received a 4.87 out of 5, and that was with 52 people weighing in. The shop had twice as many “5” ratings as the second shop on the list of 42 shops. See our report for more about that survey.

Clearly, Free Range is doing something right, and word has spread among women, trans, femme and gender nonconforming people that it is the place to go. And when they go, they have a very positive experience. So I spoke with Shawna Williams, the owner of Free Range since taking over for the legendary Kathleen Emry in 2018, about what she and the staff at Free Range do to make their shop so welcoming.

“As a queer mixed-race woman in the cycling industry, this is always there,” she said. A lot of staff conversations stem from personal experiences in shops that they don’t want to repeat.

But they don’t always get it right, either.

“We’re still working on these things all the time,” she said. “We work really hard to ask questions and to not assume someone’s knowledge about something based on the bike they come in with or their appearance … we spend a lot of time asking about their experience and if they have any questions. Asking what their goals are and what their riding style is.”

And employees are encouraged to speak up if they notice another employee have an interaction that could have gone better.

“All of us can give each other feedback at any time,” she said. “If I don’t have that — eww cringe — hangover, somebody will let me know and say, ‘Hey, can we talk about how you can do that differently next time.’

“It normalizes those kinds of conversations. The truth is, we’re all messing up all the time.”

Williams first worked as a mechanic at Free Range under Emry, then worked at Bike Works in the shop and running youth programs before returning to Free Range along with her co-worker Nikki. And Bike Works ingrained in them the importance of talking about equity and inclusion.

“Nikki and I both came from Bike Works,” she said, “and that equity and inclusion conversation happens all the time at Bike Works. And that’s something that the both of us brought with us from there.” Notably, Bike Works was also among the top five shops in the survey.

“To quote Ayesha McGowan, first professional female African American cyclist, ‘Representation matters,'” she said. “When women, trans, femme and non-binary folks come into Free Range and they see three women working on bikes and owning our knowledge, it gives them permission to do the same.

“To be clear, I’ve had many positive interactions with men at bike shops, and I consider many of the mechanics and shop owners in this city to be allies to WTFNB folks.” But the industry as a whole has a lot of work to do to improve visibility of people of color and WTFNB people.

“The industry is kind of getting on board with this conversation now, which is good to see, but there’s a long way to go,” she said. “It’s constantly baffling to me why we keep seeing the same issues over and over again. And why the same subset of people are constantly catered to when there is a wide swath of folks who aren’t included in that.”

Williams is hopeful that the survey is just a starting point.

“I think there’s a lot this survey doesn’t tell us,” she said, “but when taken qualitatively these results can act as a public access point to a conversation that has been happening one-on-one amongst WTFNB cyclists and industry folks in the Puget Sound for decades.” She said she doesn’t support “any knee-jerk cancel culture.”

“I sincerely hope that the take-home message for shops and customers is that there is an important conversation here that needs to happen, and that everyone at every score level on this survey has work to do,” she said. “This is an opportunity for every shop to think critically about who and how they serve.”