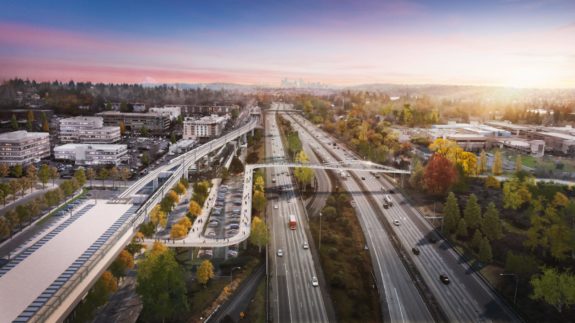 The Northgate bike/walk bridge between North Seattle College and Northgate Station is scheduled to open in fall 2021. It’s been a lot of work to get this thing designed and funded, including a lot of advocacy from Cascade Bicycle Club and others as well as leadership by city, regional and state leaders.

Today, Seattle Mayor Durkan and Councilmember Debora Juarez hosted a groundbreaking celebration to mark the start of construction on the Northgate Pedestrian and Bike Bridge over Interstate 5. They were joined by other civic leaders, transportation agency partners, and community organizations who have supported this project.

The bridge will reunite two neighborhoods that have been divided by I-5 for nearly 60 years.

“Our City is under construction before our eyes and investments like light rail will be transformational for North Seattle. This bridge will be an important connection between the reimagined Northgate with light rail and North Seattle College, and will provide convenient and safe routes for pedestrians and bikers,” said Mayor Durkan. “I want to thank all the community partners who have helped us make this project a reality, including Representative Valdez and Pollet, and Senator Frockt, who along with bike and neighborhood advocates helped Seattle achieve this important milestone.”

By Fall 2021, people will be able to walk and bike across the bridge, connecting people to thriving neighborhoods and retail centers. This bridge will provide an easy connection between the future Northgate light rail station and North Seattle College.The light rail stop will see about 40,000 riders boarding there daily, making this pedestrian and bike bridge crucial.

“North Seattle College has thousands of students and staff that will benefit from the access that the Northgate Pedestrian and Bicycle Bridge and the light rail will provide” said North Seattle College President Dr. Warren Brown. “Without a doubt, this project is an educational lifeline for our students.”

The Northgate Pedestrian and Bike Bridge was made possible by our State Legislators, in particular Representative Valdez, Representative Pollet, and Senator Frock, whose vision made this bridge a reality by providing $10 million in the state transportation budget.

Additional funding for the bridge comes from the voter-approved Levy to Move Seattle, Sound Transit, and additional local sources.

Throughout design, the project benefited from the involvement of nearby residents and businesses, North Seattle College, and bike and pedestrian advocates.

Here’s the scoop on what you can expect in the short-term:

We started construction last month on the east side of I-5. This month, we’ll work on the North Seattle College campus on the west side of I-5, installing drainage, clearing vegetation and preparing for drilling for the bridge shafts. The concrete bridge girders that will eventually span I-5 are being constructed off site. Drivers can expect to see some construction equipment and cranes around the project site as they pass through the area on I-5 between N 92nd St and N Northgate Way.

Construction will be complete in fall 2021.