Starting Jan 1, drivers must change lanes when passing people biking or slow down and give 3 feet + More

Some of the most significant changes to Washington State’s rules of the road in recent history will take effect January 1, when SB 5723 becomes law.

Perhaps the biggest and most exciting change is that people driving will now have clear instruction on how to safely and legally pass someone on a bike (or riding a horse, a carriage or tractor):

The law passed during the 2019 legislative session with wide bipartisan support (70-26 in the House, 43-5 in the Senate) and is in large part thanks to the advocacy work of Washington Bikes.

These changes are very favorable to people biking and set a new standard for safe passing laws in the U.S. They make it clear that a person’s safety is paramount. No, they won’t suddenly make it super comfortable to bike on the many streets and highways in our state that have no bike lanes or adequate shoulders. But they at least remove a lot of the doubt about what is legally expected of everyone.

Of course this brings us to the big questions: Will people know the law has changed? And will it be enforced?

There are a handful of other rule changes, including some rules that I (and, I’m assuming, many others) thought were already the law. For example, let’s say you are biking straight, but the rightmost lane becomes a right-turn-only lane. Previously, you could read the law as saying that you must bike in the through lane, not the right turn lane. Sometimes this might make sense (like when you need to go around a traffic island to continue straight), but other times it would basically force you to ride in the middle of two lanes of traffic. That’s just not safe, and shouldn’t be legally required. So the new rules clarify that yes, you are allowed to bike in the turn lane even if you intend to go straight.

People with disabilities are not required to use an inaccessible sidewalk

This one blew me away when I first saw it. A very literal reading of the existing law says that someone with a disability is required to use the sidewalk whether that sidewalk is accessible or not. I want to believe this law was never enforced to the word, but I can’t be sure. Either way, it’s good to have it fixed to clarify that of course a person can’t be required to use a sidewalk they can’t use.

The same section was also updated to clarify that no, a person walking on a roadway without a sidewalk or shoulder is not legally required to throw themselves into the bushes or a ditch in order to get out of the way of a car. Again, you could read the existing law (“shall move clear of the roadway”) as saying as much. You are still supposed to move out of the road, but only “when practicable.” 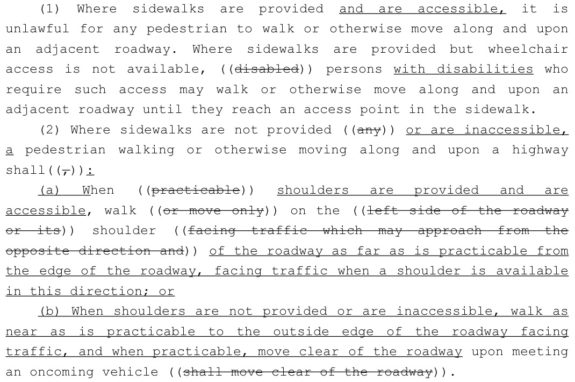 And finally, if the worst happens and someone driving kills or seriously injures a vulnerable road user, existing negligent driving fees are doubled, and the extra fees will go to a special account dedicated to educating the public, law enforcement or prosecutors about the vulnerable user law. Since the state passed the vulnerable user law in 2012, it has not been used as often as it should. And awareness of the law and how it works has been identified as one of the major reasons.

Second degree negligent driving is a very interesting and forward-thinking infraction because it provides significant penalties for killing or seriously injuring someone, even if the person responsible didn’t mean to do it or otherwise engage in criminal negligence (like DUI). Far too often, people are killed due to a simple traffic error, like failing to to yield at a crosswalk or illegal lane change. And too often, the excuse is that the person driving didn’t see the person they struck. In many cases before the vulnerable user law, people would walk (or drive) away from seriously injuring or killing a person with as little as $42 in fines. Such a small penalty for such a large loss just is not right.

But the law stops short of criminalizing bad driving. Because filling prisons with people who weren’t paying enough attention while driving also doesn’t make a ton of sense. Instead, the law prescribes a set of penalties that are more restorative, including suspensions to the driver’s license (up to 90 days), road safety courses, relevant community service and significant fees (up to $5,000). Judges have some discretion over the penalties, though the new fees cannot be waived unless the offender is deemed indigent.

Obviously, no penalty can ever make up for a lifelong injury or death. And none of these law changes include major increases in funding for building safe streets across our state to prevent traffic collisions. In fact, many of them are common sense laws for how people should get around on our substandard, lacking roadways, like those without safe spaces for biking and walking. But they are steps in the right direction, and could set examples for other states to emulate.

25 Responses to Starting Jan 1, drivers must change lanes when passing people biking or slow down and give 3 feet + More