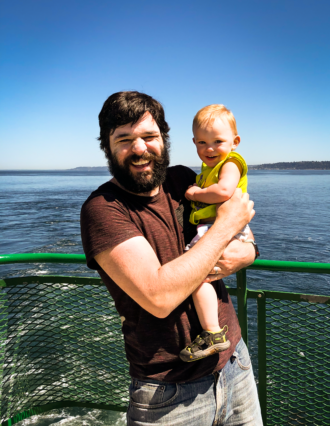 In addition to writing, I also take care of this incredible kiddo.

The contract is signed, so it’s official: I’m writing a book about Seattle bike culture and politics for University of Washington Press.

Tentatively titled “Biking Uphill In the Rain” and code-named (by me) “Seattle Bike Book,” the book will take a big step back from the daily news grind and look at what has been happening in this town. What has worked? What failed? And what does it take to build a movement to challenge an entrenched and dangerous car culture?

The book will give me a chance to conduct some long-form interviews and go deeper than I can go in my near-daily posts on this site. With the advantage of hindsight, I will highlight some unsung heroes and reflect on the styles of advocacy that has proven effective in the long-run. It won’t see a bookshelf until at least 2022, since UW Press has a lengthy peer-review process. But I’m excited that the scale and timeline of release will allow me to get some distance from current-day city politics.

Don’t worry, Seattle Bike Blog isn’t going anywhere. In fact, I will need your support more than ever if I am going to pull this off. The book advance is enough to replace my tired 2010 Macbook Pro, which I’ve used to type nearly every word on this site, but not too much else.

More than 90 readers pitch in a combined $600 every month as Seattle Bike Blog Supporters, and a handful of great local businesses invest in advertisements. Through this income, I have been able to provide truly independent reporting about biking and transportation in Seattle since 2010. I am not beholden to any politician, organization or company, and I intend to write an honest account of our city’s bike movement, warts and all.

But I won’t be able to do it without you. That’s why I’m also launching my second-ever supporter drive. My goal is to double the site’s monthly reader support by the end of January. So I’m hoping to get to $1,200 per month, which would be 180 people at our current average contribution rate of $6.60. I’m also urging current supporters to consider increasing your contribution if you can to help me reach this goal.

Anyone who has contributed for at least one year will have the option to be acknowledged in print when the book is published. And, of course, you will know that you are supporting Seattle Bike Blog’s continued and effective work.

You no longer need a Paypal account to sign up, though that is an option. Any credit or debit card should work:

If you would like to arrange payment via check, email [email protected].

This bike stuff is working

The bike investments and policies I have been reporting about for the past decade are working. November 2019 just saw Fremont Bridge bike crossings increase 20 percent over the all-time November record set just last year. Total 2019 bike trips on the bridge are up 12 percent over last year’s record with no signs of slowing down.

We are on track to tack 110,000 rides on the annual record. We basically had an extra August-worth of bike trips this year.

My reporting was instrumental in crafting Seattle’s Bicycle Master Plan, so much so that SDOT secretly cited me as a contributor when they won a Seattle Design Commission award. My reporting was a major impetus for Seattle’s private bike share permitting pilot, a concept that influenced bike and scooter share policies across the country and boosted bike ridership in our city. And, of course, my reporting on individual bike facilities has been very influential in getting those projects from idea to reality. When I first wrote about the need for protected bike lanes downtown, people scoffed and said it would never happen. Now you can ride from the International District to the Space Needle without ever leaving a protected bike lane, and downtown connections to Dearborn, Westlake, Capitol Hill and waterfront routes to West Seattle and Interbay are all in the works. Just this month, SDOT has started work to fully connect the S Columbian Way bike lane to Beacon Ave S, and an SDOT spokesperson said my reporting on the gap was a major impetus behind the change.

I have also organized Seattle’s Cranksgiving food drive bike ride for ten years straight, and participants in the 2019 event gathered a metric ton of food for Rainier Valley Food Bank. The event is an example of how ideas can be powerful. For about $50 in printing costs each year, I have hosted an event that inspires people to get together and backpack by backpack, pannier by pannier donate thousands of pounds of food, all by bike.

Obviously, I am not solely responsible for any of this, but my work has been a part of it all. My reporting has also helped connect everyday people with each other, many of whom have gone on to become advocates for safe streets in their neighborhoods, workplaces or as part of a citywide effort. This is part of why Seattle Neighborhood Greenways named me their first ever Greenways Champion in 2014 as “the individual who has done the most to advance that cause of safe streets in Seattle.”

Ideas and information are powerful, and I believe strong independent journalism is invaluable to our society. But capitalism does not agree, which is why news organizations continue to struggle in our city. Seattle Weekly is done, KOMO News has been bought out by right wing propagandists, the Stranger is a shell of its former self, and many other smaller news sources are scraping by. So an investment in Seattle Bike Blog and other local journalists is a powerful investment in your city. I’ve published 3,428 posts since 2010, but it’s impossible to quantify the value of what you purchase when you sign on to support this work because ideas spread and influence our city in so many far-reaching ways.

Thank you for reading,
Tom Fucoloro

This entry was posted in news and tagged biking uphill in the rain, site updates. Bookmark the permalink.