Who’s the best District 7 candidate for biking and safe streets?

As noted in our previous posts, Seattle Bike Blog is not doing official endorsements this primary. Instead, I’ll be going district-by-district, posting videos from the MASS Coalition’s transportation forums along with a roundup of transportation-related endorsements and other notable news items and thoughts.

Now, District 7. Right off the bat, we gotta talk about the Magnolia Bridge. Every candidate supports replacing this bridge, but the most popular idea among candidates is a “one-to-one” replacement of the car-centric freeway-style viaduct, which is complete nonsense. This would cost upwards of $420 million, a price tag that is simply not justified by the relatively small number of households it would serve. Investing in car-centric freeway infrastructure is also not in line with our climate goals. Our city has massive transportation challenges in quickly-growing parts of town and in lower-income areas that have long been neglected.

In order to make a Magnolia Bridge replacement make sense, it’s going to need to be paired with some major changes in the area, including a lot more housing and transit. So while all candidates support replacing the bridge, there are some differences in how they talk about it.

For example, when Andrew Lewis talked about his support for the bridge during the MASS forum, he also talked about it as a way to serve an increase in housing in the neighborhood.

“I think as we start having these conversations about densifying in Magnolia Village, densifying up at 34th and Government, it makes a lot of sense to replace the bridge,” said Lewis. He also talked about the transit service the bridge carries.

Michael George talked about replacing the bridge “the way it should be, which is with a lot of affordable housing.”

Jason Williams said he supports a one-to-one replacement (again, total nonsense), but then talked about adding more housing: “If we’re gonna add density in places like Magnolia. If we’re going to in other neighborhoods throughout the area then we need to make important infrastructure investments.”

Jim Pugel at least mentioned transit and suggested that neighbors he’s talked to would support a toll to help pay for the bridge.

Lewis and Williams both told Lester Black at the Stranger they support increased funding for bike projects (be sure to check out the spreadsheet of responses). Pugel was iffy. George did not respond.

Here’s a look at some endorsements:

Below is the video from the Move All Seattle Sustainably coalition’s transportation and housing forum for District 7 (conversation about biking starts at 56:00, followed by the Magnolia Bridge question). Rooted In Rights not only produced the video, they also created this handy transcript (.txt)

Here are the candidates’ scorecards from Transportation For Washington: 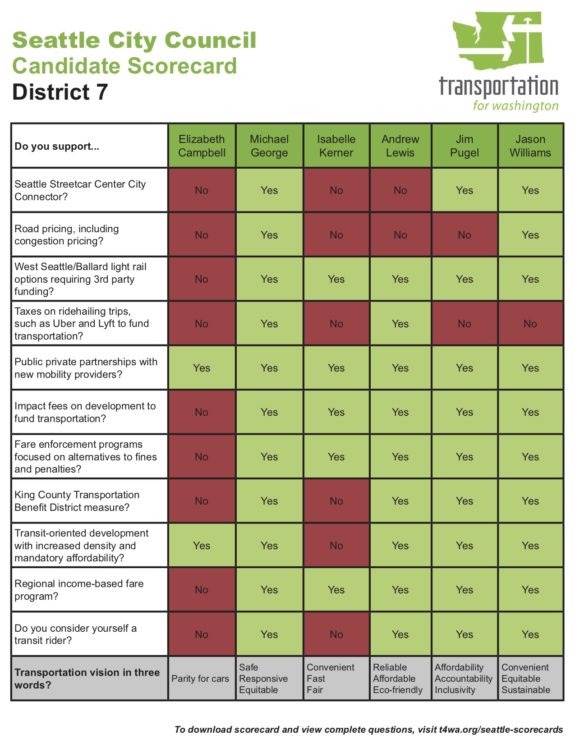 You can also hear each candidate give general statements in this cool Seattle Channel online voter’s guide.

4 Responses to Who’s the best District 7 candidate for biking and safe streets?