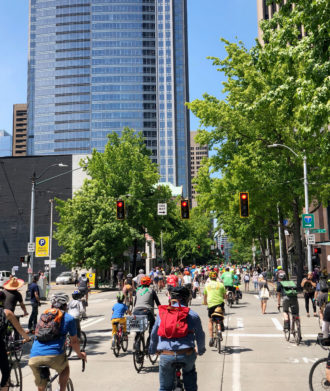 The Ride For Safe Streets, organized by members of the Move All Seattle Sustainably coalition, came just days before the City Council Transportation Committee was scheduled to hear about Mayor Jenny Durkan and SDOT’s latest version of their short-term bike plan, which slashes the previous plan.

“Families of color should not need to drive their children to their neighborhood school just because the only routes available are too dangerous to walk or bike,” said Jen Grant from Familybike Seattle, who helped lead a Kidical Mass ride to the event.

“Too often, the disability community is pitted against biking and walking and safe streets advocates, we don’t want that to happen” said Anna Zivarts of Disability Rights Washington’s Rooted In Rights project. “We all need to go places, we all need to go places safely. And we can do that. We can create that city. But we need to be working together and we need to be sure our opponents are using us against each other, which is what’s happening now.” Zivarts and Michael Forzano called on safe streets advocates to support their campaign to make sure bike and scooter share does not negatively impact disabled people navigating sidewalks. You can learn more in this recent op-ed in the Seattle Times.

Dr. Jeanna Wheeler of Seattle’s chapter of 500 Women Scientists pointed out that though the Washington carbon tax lost statewide, Seattle voters approved it by more than 68 percent. “To the hesitant elected officials who believe that bus lanes, new housing, bike lanes, walkable streets, all that, are political poison because they inconvenience driving and parking, please look again at 1631. Seattle voters are ready to support more than feel-good measures,” she said. “This is the new face of climate denialism here in our emerald city.”

“It is a shame that in South Seattle we will never see completed safe bicycle infrastructure without prioritization,” said Councilmember Lorena González. She encouraged the crowd to continue building the movement for safe streets.

“The city has done some good things. On paper,” said Councilmember Mike O’Brien. “We have committed to Vision Zero to make sure our city is safe for all road users. We have an ambitious Climate Action Plan that says we’re going to eliminate all carbon emissions in our city. We have bike/ped/transit master plans that lay out a road map to do that. The plans are there, folks. we have some work to do to get those implemented. 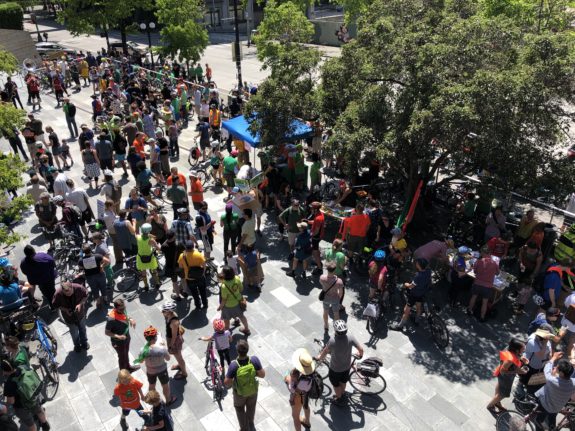 The rally also came just a week after Jackson Reavis, 22, died while riding a motorcycle on 35th Ave NE. The fatal collision is still under investigation.

Reavis was a 2015 Roosevelt High School graduate who had recently finished a degree in design, digital art and marketing, according to his obituary:

He had a remarkable eye for detail and an artist’s discernment for color and balance.

Jackson was an accomplished athlete who kept himself in great shape. Tall with a chiseled frame and a beautiful, infectious smile, he was always noticed when he entered a room. He played lacrosse and football, lettering in football on the Roosevelt team that reached the state quarter finals in 2014.

Our condolences to his friends and family. A GoFundMe has been set up to help cover funeral expenses.

The mayor’s decision earlier this spring to scrap planned safe streets measures on 35th Ave NE was a major impetus for organizing this protest and rally. Concerns about unsafe conditions on the newly-paved a redesigned street, such as speeding and dangerous passing, began as soon as the paint was dry, and the City Council Transportation Committee even sent a letter to SDOT (PDF) expressing concerns about safety on the street. All this happened before last week’s fatal collision. While it is not clear (and may never be known) whether the scrapped safety improvements could have prevented this death, the street did not previously have a long history of fatal collisions. And protected bike lanes like those originally planned are known to reduce serious injuries and deaths for all road users.

There are two basic ways that bike lanes get built in Seattle: SDOT chooses high priority projects from the Bicycle Master Plan to pursue for improvements or a major paving project remakes a street that is also designated for bike lanes. 35th Ave NE was the latter, a project chosen by SDOT’s street paving team, not by the bicycle program or bicycle advocates. We need to build bike network connections when streets are repaved because it is by far the most cost-effective way to build out significant stretches of the bike network. But it comes to prioritizing bike and other safe streets projects, every advocacy group and the city’s Bicycle Advisory Board have been clear: South Seattle and downtown need to be the top priorities.

This was highlighted during the rally Sunday when one of the biggest applause lines came after the Major Taylor Project’s Rich Brown said, “I’d like to urge SDOT to reassess the Bicycle Master Plan to figure out how to make things more equitable for residents of South Seattle.”

Seattle’s safe streets movement has come a long way to better prioritize equity, and people of color are more likely to rely on bikes for transportation in the U.S. than white people. But the rally and ride turnout did highlight that Seattle’s bicycle advocacy community is still mostly white.

You can listen to the rally speeches here: