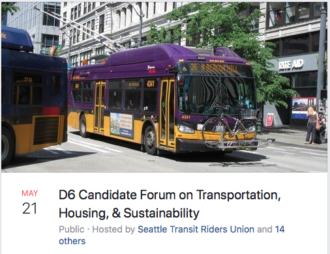 Screenshot from the first forum: District 6.

Seattle’s City Council is facing its biggest shakeup since, well, the last time the seven district-based seats were up for a vote.

An unprecedented 56 candidates are running for the City Council seats, and only three incumbents are seeking another term (Crosscut put together a handy candidate guide). So we are guaranteed at least four new members on the Council, one seat away from a voting majority (the two at-large Council seats, held by Teresa Mosqueda and Lorena Gonzáles, are not up for election until 2021 along with the mayor).

You can hear candidates talk about transportation, housing and sustainability at a series of forums over the next couple weeks that members of the Move All Seattle Sustainably coalition have organized:

If you don’t know your district, enter your address on this page to find out. The primary is not until August 6, but don’t wait to register. If you are new to King County, we vote by mail here, which is wonderful. Register now to avoid any hassles getting your ballot. Since primary votes happen in the middle of summer, it’s easy to get distracted or busy and miss deadlines. Voter turnout is much lower in the August primary than in the November general election, which means your vote is especially important.

The MASS coalition is not currently planning primary forums for Districts 1 or 5. Only three people are running in District 1 including incumbent Lisa Herbold, and two of them will make it through the primary. So West Seattle has the easiest job for the next couple months. Six people are running in District 5, the same number as District 3. But neither of those has as many candidates as the open seats in 2, 4, 6 and 7. District 6 takes the cake with a stunning 14 candidates for Mike O’Brien’s spot.

The big business lobby has said they will spend big this year to try to win a majority they see as favorable to their interests. Meanwhile, the democracy voucher system has empowered more grassroots-level candidates than ever before. Sprinkle some candidates with disturbing and dehumanizing ideas about homeless people into the mix, and we have the makings for one of the toughest Council campaigns in recent memory. It will be a true test of the city’s values.

There are few major transportation measures in the near future (the Transportation Benefit District will need to be renewed in some form, but there are no votes on the scale of Move Seattle or Sound Transit 3). Instead, Councilmembers will be tasked with fulfilling the will of the voters and enacting the plans developed and funded over the past decade.

In some ways, this is harder than passing grand measures because it requires getting dirty and working through the finer details of compromise and change that our city needs if we are going to continue shifting more and more trips to biking, walking and transit. Neighborhood streets need to change. The amount of housing, especially near frequent transit service, needs to grow. Economic, racial and disability barriers need to be torn down. None of this work will be easy, and we will need a Council that is ready to hold the mayor accountable for completing this work.

Below is the event description for the District 6 forum tomorrow (Tuesday):

Join us for a City Council candidate forum focusing on making Seattle a more affordable and sustainable community. We will be hearing from candidates for City Council in District 6 as they answer questions about housing, mass transit, ensuring everyone is able to use our streets safely and achieving Vision Zero, reducing carbon emissions, and centering racial equity in all of this work.

This forum will be moderated by Heidi Groover (reporter for the Seattle Times and formerly for The Stranger).

Transit Riders Union and our partners at the MASS Coalition (including Sierra Club, Cascade Bicycle Club, Seattle Subway, Seattle Neighborhood Greenways, 350 Seattle, Disability Rights Washington, Rooted in Rights, The Urbanist), and the Housing Development Consortium are coming together to host this forum.

The forum will be held at the Phinney Neighborhood Association (lower building), which can be reached via transit on Metro route 5. Bike parking is available on the west side of the building. This event is wheelchair accessible and CART services will be provided.

This entry was posted in news and tagged 2019 primary, city council. Bookmark the permalink.