Mountains to Sound Greenway is now a National Heritage Area

Our local pride and joy is now officially a national treasure! After 8 years of tireless advocacy by @SenatorCantwell, Congressman Reichert, and the rest of our WA delegation, the Mountains to Sound Greenway has become our nation’s newest National Heritage Area. #YesGreenwayNHA pic.twitter.com/cgVvdo3qg4

The Mountains to Sound Greenway, a huge swath of land surrounding I-90 from Seattle to Ellensburg, has been designated a National Heritage Area.

This designation could qualify the area for National Park Service funding to the tune of $150,000 to $750,000 per year, the Seattle Times reports. As the Mountains to Sound Greenway Trust wrote in a press release, this funding could help:

Here’s a map of the Greenway: 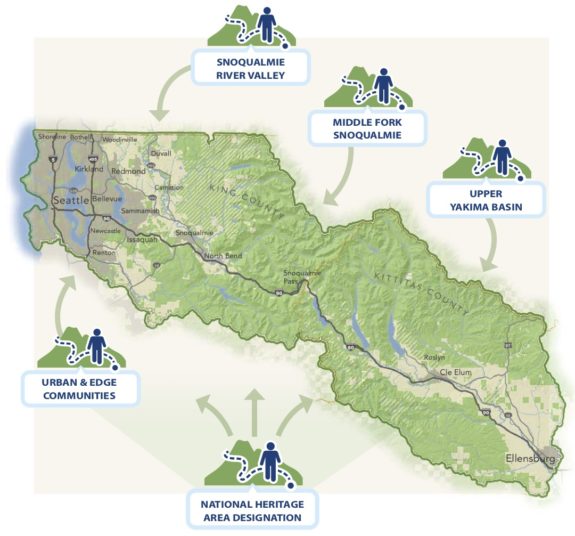 Map of the Mountains to Sound Greenway National Heritage Area, from the MTS Greenway Trust.

The mission of the Trust and the National Heritage Area are based around public lands, recreation and cultural heritage. And since regional biking and walking trails already connect so much of the Greenway area, it will be interesting to see how this national designation opens opportunities to make them even more accessible to more people.

Our local pride and joy is now officially a national treasure. After eight years of tireless advocacy, the Mountains to Sound Greenway has become our nation’s newest National Heritage Area (NHA).

Today we celebrate all that the NHA designation will bring the Greenway. As our communities undergo massive growth, this designation gifts us new opportunities to more effectively conserve natural resources, protect our cultural heritage, and contribute to the economic vitality of the region. Specifically, it will help us to:

Designation as a National Heritage Area requires an act of Congress.  The Greenway National Heritage Area legislation was originally introduced in 2013 by U.S. Representatives Dave Reichert and Adam Smith and Senators Maria Cantwell and Patty Murray. And it would not have been possible without the entire congressional delegation’s persistence and collaboration, including U.S. Representatives Suzan DelBene, Pramila Jayapal, and Kim Schrier.

In this era of partisanship, we are especially proud that the Greenway NHA designation resulted from strong bipartisan collaboration and the endorsement of more than 6,500 individuals, and public and private partners including Governor Jay Inslee, King County Executive Dow Constantine, Microsoft, Expedia, REI Co-op, the Trust for Public Land, and the Mountaineers.

How inspiring it is to know we all share a common belief – the belief that nature enriches all of our lives. It is our natural environment that has drawn so many of us here, individuals and businesses alike. The Greenway surrounds us as we carry out our daily activities and it’s there for us when we need an escape. As the nexus of urban and wild life, the Greenway helps us thrive as individuals and as a community.

The NHA designation is not only a win for our state but will also allow the Greenway to serve as a national model for collaborative conservation.  It is a creative, non-regulatory approach to conservation that is rooted in cooperation among tribal, federal, state, and municipal agencies, and local residents.

Thank you to every one of you who supported us over the years as we set out to accomplish what we celebrate today. Thank you for signing petitions, for your calls and letters of support, for donating to our cause, and lending your voice and talents to making this dream a reality. It is because of all of you that the Greenway will be conserved for future generations, connecting our residents and visitors with the diverse people, landscapes, and stories of this region.