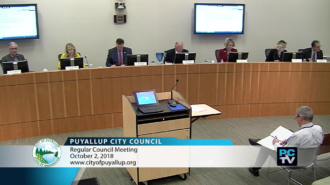 Puyallup City Councilmember Jim Kastama (right) proposed a ban on sidewalk biking due to “a recent increase in criminal activity by persons riding bicycles on the sidewalks located in the CBD-Core.”

Puyallup City Council is considering a ban on people over the age of 12 riding a bike on a sidewalk, city-owned parking lot or alley in the city’s downtown in part due to “a recent increase in criminal activity by persons riding bicycles on the sidewalks located in the CBD-Core,” according to a whereas clause in the ordinance proposal by Councilmember Jim Kastama (PDF).

Though bill sponsors said they were concerned about pedestrian safety during an October 2 meeting (video), targeting people suspected of drug dealing seemed to be at least part of the desire for the proposed ban.

“My understanding was that our law enforcement officials are asking for this because we’ve got people riding around, dealing heroin,” said Councilmember Cynthia Jacobsen during the meeting. “That’s kind of a tough thing to say from the dais, but that was my understanding.”

But this proposal follows a dramatic Council action to use zoning laws to severely limit the locations of facilities that serve people experiencing homelessness in Puyallup. The ordinance effectively make it illegal to open a facility anywhere outside a small industrial area in the northeast corner of town, the News Tribune reported. Earlier this year, Councilmember Kastama also led a successful effort to get rid of public toilets because they were used by people experiencing homelessness.

Kastama’s sidewalk biking ban proposal lists “criminal activity” as one of the reasons, and during the meeting he described a rather specific demographic as the target of his ordinance.

“For some strange reason, there are a lot of adult men on BMX bikes but nevertheless they are wreaking somewhat havoc in the pedestrian areas,” he said. Councilmember Robin Farris questioned Kastama’s motivation behind the proposal during the meeting.

“The comment about adult men on BMXes can lead people to think that this may be motivated by something other than public safety,” she said.

“Is part of this because of the drug trade and all the frankenbicycles and all the driving around and doing stuff with drugs?” she asked.

“There are certainly people we have arrested that have been on bicycles who have been in possession of narcotics,” said Engle. But that’s not why he supports the law, he said. “I support this from a public safety perspective.”

But especially with such a specific demographic of people clearly targeted by the ordinance author, this law seems to open the door to unequal enforcement. All over the country, from Chicago to Tampa, police regularly enforce bicycle laws more heavily on people of color. Especially for low-income people, an unpaid ticket can turn into a court summons and then a warrant for arrest. And many instances of police use-of-force begin with very low-level contacts like traffic stops that then escalate.

Mayor John Palmer said downtown Puyallup streets probably do not feel safe for many people “because there are no bike lanes in the downtown core.” He said the city will look into other options for addressing the issue, like maybe a sidewalk speed limit. 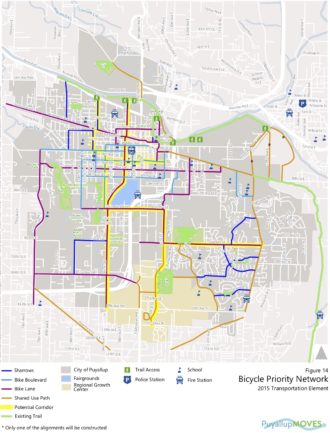 “I don’t want to do anything to infringe bike riding in Puyallup,” he said. He mentioned the need for bike connections to Sound Transit service and the Foothills Trail, and pointed to the Active Transportation Plan the city adopted last year that includes bike lanes. “I hope we can start implementing that plan.”

But the plan calls for few bike routes in the downtown core. And until Puyallup’s downtown streets have bike lanes, many people will choose to bike on the sidewalk because they feel safer there. It is nearly always faster to bike in the street, so the small percentage of people who feel comfortable in mixed traffic are likely already doing so. Making sidewalk biking illegal without providing a safer option forces people to either break the new law or stop biking entirely.

The Council is focused on the budget for the next couple weeks, but the sidewalk biking ordinance could come back up next month. Mayor Palmer, Councilmember Robin Farris and Puyallup Police Public Information Officer Ryan Portmann said the proposal as written is too broad. For example, it would extend far beyond just sidewalks, including alleys and city-owned parking lots. It’s not clear whether the city even has the legal authority to ban biking in those places, since bikes are vehicles under state law and can go anywhere vehicles are allowed other than designated limited access freeways. But the extent of the ban area is also rather broad, extending far beyond the handful of downtown blocks with heavy pedestrian activity.

“I would literally have to walk my bicycle from my house to City Hall,” said Councilmember Farris.

Mayor Palmer said the next step is for the City Manager to bring the Council some other options for the ordinance, likely in November or December. Though the Council could propose and adopt an ordinance all in one meeting, it is rare for them to do so.

People who want to comment on the ordinance can email the whole Council at [email protected]. People can also provide public comment before the Council meetings, though the date for discussing this proposal is to be determined.