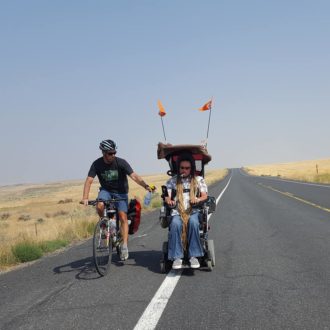 On of Ian’s riding partners helps him cool down on a long hot road. Photo from Ian’s blog.

Ian MacKay is on a 7 MPH bike tour across Washington State for the second time. As of press time, he and his riding partners are a day’s journey beyond the Grand Coulee Dam heading west on their trip from Spokane to his home near Port Angeles.

MacKay’s ride is an electric wheelchair he controls using sip-and-puff controls. It’s decked out this year with new lithium batteries that can keep him moving at his top speed for the 40 miles a day he hopes to cover during his two-week adventure. He is documenting his journey on a blog and via social media (Twitter, Facebook, Instagram), and he has been capturing the imagination of the local news everywhere he goes.

Ian was injured in a California bike crash in 2008 that paralyzed him from the neck down. While recovering he started exploring further and further from home along the Olympic Discovery Trail, a paved rail trail connecting Port Angeles to Discovery Bay. That’s how he got the idea for his first cross-Washington trip in 2016.

He gave an incredible keynote talk at the 2017 WA Bike Summit about his adventure, and I highly recommend setting aside a half hour to watch the whole thing:

MacKay has become an inspiring advocate for the power of accessible trails and routes to open our state to more people of all abilities. Following his 2016 ride, he formed the non-profit Ian’s Ride to promote “a more accessible outdoors.” He’s become one of the strongest bike advocates in Washington State.

And he is certainly doing that work both by sharing his story and just by getting out there and inviting others to join him. Along his way, people join him for stretches in their own chairs or by biking along.

His tours require a lot more planning and logistics than most bike tours, including his mom driving a support van. And his routes have to be carefully planned to make sure his chair can handle them. But the same investments and policies that make our state safer and more comfortable on a bike also make our state more accessible for people in electric chairs and other wheeled mobility devices.

Though Ian’s 2018 journey won’t bring him to Seattle, we’re cheering him and his crew on. You can donate to Ian’s Ride to help him continue his work.

This entry was posted in news and tagged ian mackay, ian's ride. Bookmark the permalink.