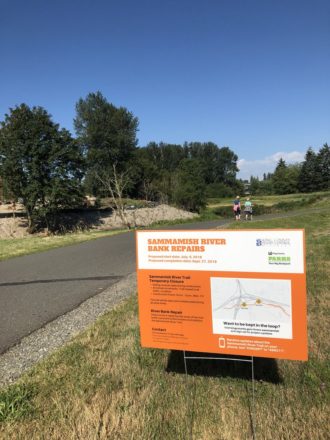 Work to repair river bank erosion will require crews to close the Sammamish River Trail for periods of 30 minutes or less starting Wednesday. Work will continue for the rest of summer.

The erosion zones are just east of I-405 between Bothell and Woodinville. Peak commute times, evenings and weekends should be open. But if you are traveling through between 9 a.m. and 3 p.m. Monday through Friday, give yourself an extra half hour just in case.

King County will begin repairing two sections of bank erosion along the Sammamish River on July 11, requiring brief, rolling closures of the popular Sammamish River Trail until the project is completed in September.

Closures are expected to last no more than 30 minutes and will occur on weekdays only between 9 a.m. to 3 p.m. There will be no detours during the brief closures.

The work is to repair two areas where the levee along the river is eroding, threatening the integrity of the Sammamish River Trail and the safety of its users. The erosion is occurring along the right (or north) bank of the river, east of the Interstate 405/State Route 522 interchange in Bothell. One site is about 500 feet east of the interchange; the second site is 1,200 feet east.

King County is performing this work as service provider to the King County Flood Control District, which is funding the project. The work is expected to conclude by Sept. 27.

Crews will stabilize the bank by reshaping it and planting native woody vegetation along it. The project also entails the installation of woody material along the eastern-most site and realignment of the Sammamish River Trail at both sites.

Residents who would like to receive text updates about the Sammamish River Trail closure or other Sammamish River Trail project information can text “KINGSRT” to “468311.” For updates via email, visit the project webpage, kingcounty.gov/rivers-sammamish, and sign up for email announcements.

FYI- Intermittent closures on the Sammamish River Trail beginning July 11. The work requires brief, rolling closures (no more than 30 minutes) of the trail at two sites between 9 a.m. and 3 p.m., Monday to Friday.