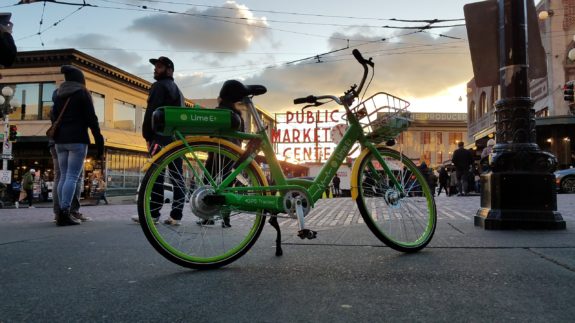 After a month of anticipation, LimeBike released 300 e-bikes into its fleet of 4,000 bikeshare bike in Seattle this past weekend, with plans to release another 200 by this Wednesday.  Eventually, “Lime-Es” will comprise forty percent of LimeBike’s fleet.

Here’s the thing — I had never ridden an e-bike in my life. And while I believe e-bikes have transformative power to flatten Seattle’s hills and get more people to ride, unlike many e-bike evangelists, I believe e-bikes shouldn’t be allowed to have e-assist past 15 or 17 mph.

As I rode from my Tangletown home to downtown where LimeBike was providing the test rides to the media Sunday afternoon (Seattle Bike Blog Editor Tom Fucoloro sent me to attend on behalf of the blog), I first had to pump up my rear wheel to address its slow leak. As I pedaled, I noticed my bottom bracket creaked an unusual amount. These problems need to get addressed.

I smoothly went down Stone Way.  As I passed Fremont Brewing, I saw four “Lime-Es” along with the full citrus spectrum of ofo and Spin bikeshare bikes out front.  The 300 e-bikes were already in use, helping people imbibe outdoors on a beautiful afternoon.  As I rode along the Westlake Protected Bike Lane, Bell Street, and the 2nd Avenue Protected Bike Lane, I hit all the usual number of red lights.  But I made it to LimeBike’s meeting spot at a WeWork space on Spring Street between 1st and 2nd Avenues.

My initial impression: E-bikeshare is awesome.

As you get on the Lime-E bike, the first thing you notice is how the bike feels solid. Thanks to the battery and a thicker, stiffer frame, the e-bike is 20 pounds heavier than LimeBike’s 40-pound pedal-only bikes.  The bike’s handlebars also didn’t flex or creak, adding to the “solid” feel.

The next thing you will notice, if you are a taller person, is the bike’s seat has higher positioning than any other bikeshare bike.  As a 6’ 1” person, the seat height was perfect for me.

No matter your height, you’ll appreciate the bike’s geometry that puts you in a more upright position than LimeBike’s pedal-only bikes, which already have decent upright positioning.

It’s time to go. As you push down on the pedal, the e-bike springs into action, giving you an extra boost off your starting line.  You are immediately aware you are on an e-bike, and you have got a headstart on your fellow cyclists.

I was told early on, the harder you pedal, the less assist the Lime-E’s motor will provide to you. So, if you don’t want to work hard going up a hill, pedal softly.  As someone who has only ever used his own power to climb hills by bike, the Lime-E’s approach was counterintuitive to me. This counterintuitive approach to hill climbing is also one of the greatest promises to how e-bikeshare will transform bicycling in the city.  Anyone will be able to go uphill on an e-bike.

I then turned right into the 2nd Avenue Protected Bike Lane.  Despite the bike’s 60 pounds, I had no problem keeping up speed.  However, I was not able to go too fast either.

The Lime-E is not a speedy steed — instead it favors steady speeds.  That’s by design.  The Lime-E provides less e-assist as it goes faster, cutting out altogether at 14.8 mph.

In part, this is for safety and liability concerns.  As the Seattle Department of Transportation regularly reminds us, pedestrians have a one-in-ten chance of death when a driver collides with them at 20 mph.  For LimeBike, any crash or collision at that speed is a serious liability. 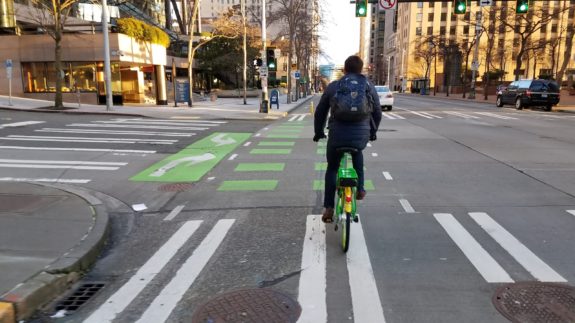 As I continued down the 2nd Avenue Protected Bike Lane, I was making all the green lights when I noticed someone else riding a Lime-E in front of me.  I caught up with him when we both hit a red light at Cherry Street.  We briefly chatted.  This was also his first ride on a Lime-E, a trip he took completely spontaneously without regard to knowledge about the bikes or their cost structure.  In our brief chat, he seemed to be genuinely enjoying the ride.

We got the green and he was off.  I crossed the intersection but then decided it was time to turnaround and head up to Pike Place Market.  I did not give much thought to it when I started my turn-around in the 10-foot wide protected bike lane, but I soon realized that a 60-pound bike is not easy to maneuver in tight spaces.

In my experience, riding a heavy bike can be awkward, with the potential for the bike to lose control while turning or even while standing with it at a stop.  Generally, that was not so with the Lime-E.  While sharp turns like mine in the 2nd Avenue Protected Bike Lane are not practical, I never felt concerned that the bike would fall over or that I would lose control.

So I headed north.  For those of you who are hoping that the e-assist would give you the boost you needed to hit all the green lights going uphill, northbound in the 2nd Avenue protected bike lane, I’m sorry, you will still hit all the reds.  This bike is steady, not speedy.

I made it to Pike Place Market just in time for an iconic sunset photo, then headed back to return the Lime-E and ask a few questions of the LimeBike VP of Marketing & Partnership and Seattle general manager.

“Whether you’re trying to go a quarter mile to three or four miles, and you’re trying to go up a hill or just down the road, LimeBike becomes a solution for you,” said Caen Contee, LimeBike’s VP of Marketing & Partnership. “I think that’s partly just additional use cases and also new demographics that will find using bikeshare as form for them to accessibly use rideshare and get around town.”

“It’s really a paradigm shift right now,” added Jason Wilde, LimeBike’s Seattle general manager. “I think previously to access bike share, most people that were not cyclists thought of cycling as a recreational activity. And now more access is actually providing a legitimate mobility solution. It’s getting people who would have never gotten on their own bike, because maybe they didn’t have one, introduced to cycling. So I think it’s doing nothing but accelerating that.”

Operationally, the battery packs will provide 62 hours of runtime and will need to be replaced every five days, on average. The battery packs can be recharged within four hours and redeployed.

With the e-assist, LimeBike expects more people to ride the bikes uphill, resulting in a more balanced distribution of bikes across the city, reducing some of their operational costs related to rebalancing the bikes.

With 500 e-bikes in its system by Wednesday, Lime-E bikes will both equal the number of bikes in the original Pronto bike share system and be the largest e-bike share system in North America.

LimeBike expects to eventually have 40 percent of its fleet be Lime-E bikes. If LimeBike kept its bike share fleet at its current size of 4,000 bikes, that would be 1,600 e-bikes.

It’s amazing how quickly Seattle’s bike share systems have arrived since Pronto ended service in March 2017. Pronto had 500 bikes with just 50 kiosks. As of this week there will be more than 10,000 bike share bikes blanketing the entire city, including 500 e-assist bikeshare bikes.  Seattle has been transformed.

“This is us enabling futurism now,” Contee said. “The idea you can see a change the landscape in two or three weeks, where the middle of the bell-curve citizens who wouldn’t consider jumping on a bike are suddenly going to see this as just another form of rideshare, that is the most accessible, affordable, and convenient for them.”

My time test riding the Lime-E ended.  I unlocked my bike from a street pole, and had to pump up my rear tire again — something I would not ever have to do with the Lime-E’s solid rubber wheels.

Then I pushed my bike halfway up the steep Spring Street block before heading back north in the 2nd Avenue Protected Bike Lane.  I was left wishing I had the extra e-boost to start me up that hill.

I think I’m in love with e-bike share.  For Valentine’s Day, I might have to go on a date with Lime-E.

I can’t wait for Spin and JUMP to bring their bikes to Seattle, too.