EDITOR’S NOTE: Thanks again to Brock Howell of Bike Happy for putting together this comprehensive weekly newsletter. 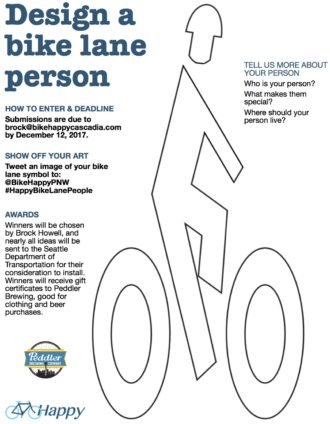 Based on the many, many fun, joyful bike lane “people” in Portland, a couple month’s ago, I asked Seattle’s chief traffic engineer if I could design a bike lane symbol here.  His response, “send some ideas.”

Instead of sending just a couple ideas, I’d love to send him a hundred.  So, I’m holding a contest for who can design the best bike lane person.  I’ll judge submissions based on originality, creativity, whimsy, and storytelling.  Winners will win gift certificates to Peddler Brewing.

Get all the details here and submit your bike lane person by Dec. 12.

● Tell the King County Public Health Board to repeal the bicycle helmet law.

— This week, the City of Seattle’s Hearing Examiner is hearing an appeal of the SDOT’s Final EIS of its plan to complete the Burke-Gilman Trail through Ballard, known as the “Missing Link.” (Crosscut, Seattle Times, MyBallard)

— Mercer Island is beginning a master planning process for improving the Aubrey Davis Park over I-90.  The project team is considering improvements to the I-90 trail, including removing the wooden trail bollards. (MI Review)

— The City of Bainbridge is considering designs for a new pedestrian/bicycle bridge to facilitate an extension of the Sound to Olympic Trail crossing Highway 305 south of High School Road, but the public doesn’t seem too keen on anything too fancy. (BI Review, BI Review)

The Future is Female

— On Tuesday, Jenny Durkan was sworn in as Seattle’s second female mayor, the first in 89 years, and Teresa Mosqueda was added to city council as its sixth female councilmember. Not that you need a reminder, but both U.S. senators, Seattle’s congressperson for district 7, six of nine state supreme court justices, the state secretary of state, the state lands commissioner, and the new King County Sheriff are all also female. (Publicola)

— WSDOT is taking public comment through Dec. 20 on using $3.5 billion in federal funding to construct 1,400 highway, transit, ferry, walking, and bike infrastructure projects to be funded over the next four years. (Kent Reporter)

— Envisioning an I-5 Lid in the U District (The Urbanist)

Twelve bicycles were listed as stolen in the Seattle-area to Bike Index, and eleven bikes were reported as stolen to the Seattle Police Department in the last week. In case your bike is ever stolen, make sure you’ve registered your bike on Bike Index. The website for Bicycle Security Advisors provides more information about how to keep your bike safe.

Thanks to everyone who took my survey on how to improve this newsletter.

Know someone who should be receiving this weekly newsletter? They can sign-up at this link:

Subscribe here to get Bike Happy delivered to your inbox every week.

This entry was posted in news and tagged bike happy. Bookmark the permalink.

1 Response to Bike Happy: Design your own bike lane person