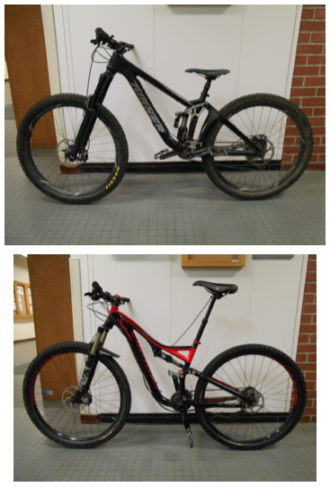 Photos from the SPD Blotter.

Seattle Police recovered a couple high-end mountain bikes that were stolen in South Seattle recently. The owner spotted them for sale on eBay, and SPD filed warrants to find the seller.

This news comes as the City Council debates adding $10,000 to the SPD budget to help coordinate bike theft reduction efforts (see the budget “green sheet” in this PDF). That effort did not make it into the most recent version of the budget, though.

More details on the eBay bust, from the SPD Blotter:

Police recovered a pair of high-end bicycles this week after a theft victim found his bikes listed on eBay.

The bikes, worth about $13,000, went missing from the victim’s South Seattle home late last month, on October 20th. The bikes had been locked up on a rack in his garage.

This week, the victim contacted police after finding one of his bikes listed on eBay. Police filed warrants to locate the seller, and recovered one bicycle from a residence in the 600 block of 3rd Avenue South and a crank and shock assembly at a second location in SeaTac.

Police learned the victim’s second bike had already been sold and shipped to the East Coast, but detectives were able to intercept the delivery and reroute the shipment to Seattle.

Detectives continue to investigate the case and are working to identify and arrest the suspects for trafficking stolen property.

This entry was posted in news and tagged bike thefts, spd. Bookmark the permalink.