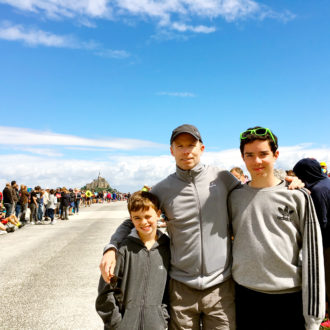 Derek and his sons Ben and Geoff at the Tour de France in the summer of 2016. Photo courtesy of Jane.

Jane met Derek in the circulation department of the Seattle Times in 1988, and he wooed her by drawing silly cartoons for her. She still has some of those cartoons, and included a couple in the booklet for his funeral. They are nestled in right next to photos of a scruffy man, his wife and the two school-age sons he loved.

Derek Blaylock was killed one year ago while biking home from the Northgate Transit Center. The man who allegedly killed him has been charged with vehicular homicide and hit and run. If guilty, Blaylock would be the second person Kevin Brewer has killed while driving. He was arraigned in King County Superior Court today and released on $100,000 bail with the condition that he not drive.

But this story isn’t about Brewer or that awful day, September 21, 2016. This story is about a funny, reserved man who graced this region for half a century, from his childhood in Lynnwood with a bedroom wall fully dedicated to the band Kiss to his life as a husband and father in Seattle.

“He was completely charming,” his wife Jane told Seattle Bike Blog outside a Phinney Ridge coffee shop recently. He chose his words carefully, and that included his jokes.

“He had one-liners that would leave people on the floor,” said Jane.

Derek was “a major health nut,” and he could cook like no other. He drank a kale and flaxseed smoothie every morning (she grimaced at the thought of the drink, which she described as “gray”) and enjoyed a Gibson martini every Friday (gin and vermouth with a pickled onion).

“He was a wizard at meat,” Jane said. He once “adopted” a prosciutto at Pioneer Square’s legendary shop Salumi. Jane smiled wide when she talked about Derek and that leg of cured ham.

“He had to go down there periodically, and he’d say, ‘I have to go rub the prosciutto.'” When he finally brought it home, there was no way they could eat it all.

“Everybody got prosciutto that year.” He also corned his own beef and “could roast the hell out of a chicken, and it was the best thing you ever had,” said Jane.

“I am missing his meat skills.”

Derek was also a casual writer, penning several stories for ParentMap, like this 2009 story about looking at bugs with his son Geoffrey, then 5 years old. He worked in the circulation department at the Times for 25 years before going to work for Expedia. But he always kept his work life and his home life separate. And his family was everything.

“It was all about the kids,” Jane said. As a family, they went on rides along the Burke-Gilman and other area trails. The boys had to watch every stage of the Tour de France with him.

“But riding in the city is scary,” Jane said. It’s hard to keep kids in a safe space while biking on many city streets.

Derek had been biking for as long as she had known him. When they turned 50 last year, “we decided we weren’t going to do any fancy presents, but we were going to instead take the boys to Europe.” They travelled to watch the opening on the Tour. The photo at the top of this story is from that trip.

Derek would have hated all the public attention he is getting now.

“He would go to great lengths not to impose on people,” said Jane. He was humble, and did not often put himself in the center of attention. “He was super subtle and in the wings.”

Jane and the boys have now been through every holiday, every birthday and every anniversary without Derek.

“My boys are awesome,” said Jane. “They have been my rocks.

“They are like their dad. They are super resilient.”

The parents at St. John’s, where their younger son Ben goes to school, have been “incredible,” Jane said.

“They keep me busy, they keep my son busy. It’s not forced or pitiful, it’s just good friends.”

Geoff was just two weeks into high school when Derek died. The start of high school is a hard time even without any other big life challenges.

The boys don’t want to know the details of what happened that day. But Jane just can’t understand why her husband was ever in the path of someone with such a history of dangerous driving, including one death and ten other serious collisions in the past decade.

“It just fills you with this anger of, ‘How could this happen?” said Jane.

“Here’s my husband, who obeys the rules of the road like a Boy Scout, and he encounters a person with no regard for others. He met his opposite on the road.”

The past year, the Blaylock family has faced an enormous loss. But there has been an addition.

“Ben was putting on the full pressure for a dog,” Jane said. And shortly before Derek died, he finally caved. He and Jane had decided to surprise the kids with a dog, “but then this happened.”

So one day not long after the collision, Blaylock family friend Colleen comes walking down the street with “the most adorable dog.” There’s been a litter nearby, and she said the family should go get one.

Jane initially didn’t think she could handle such a responsibility, not at that time. But Ben was very convincing, and the puppy sure was cute.

That first night, Teddy got very sick. He was already sick when they took him home, and they had to rush him to the emergency vet. The family had hardly known Teddy for hours, and here they are in the night deciding whether to spend thousands to save him.

“It’s one of those sappy ‘Who saved who?’ stories,” said Jane. She loves Teddy. “I swear to you it’s Derek reincarnated.”

On paper and in government databases, Derek was one of 40,000 people to die in United States traffic collisions in 2016.

But there is nobody else in the world like Derek. As Jane handed me the program from his memorial, she pointed to his photo on the front page. He is smiling at the camera, a little disheveled under his cycling cap from a bike ride along the beach.

“He was just scruffy and awesome,” she said. “There’s nobody like him.”