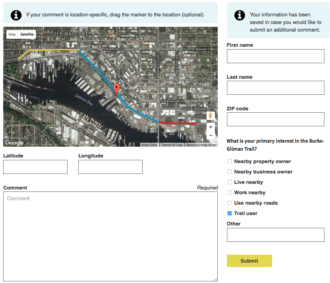 SDOT staff held a series of workshops on specific trail sections in recent weeks, and now they are hosting a big open house to discuss the project design as a whole. You can also comment online.

This is your chance to see the latest concepts and weigh in on specific design considerations. This is part of the community design process Mayor Ed Murray, many longtime project appellants and and longtime trail supporters have created together to finally finish this damn trail.

We want to hear your ideas. Join project design staff at an in-person event to help us better understand local conditions, opportunities, and challenges along the preferred alignment of the Missing Link:

Can’t make it to the event? Visit a 24/7 online open house from July 10 to July 23 at BGTMissingLink.participate.online

This entry was posted in news and tagged ballard, missing link. Bookmark the permalink.