Editor’s Note: There are few places on earth as well-suited for bikepacking trips than Washington State. If you bike regularly and your standard trip includes at least one hill, then you are more than ready to load your bike with camping gear and set out on an amazing adventure. Below is one somewhat ambitious trip idea. I’m hoping to keep bringing you bikepacking reports (email [email protected] if you want to share your trip). For some good starter ideas, see this post by Martina Brimmer at Swift Industries, this post by Marley Blonsky and get copy of Cycling Sojourner Washington by Ellee Thalheimer. 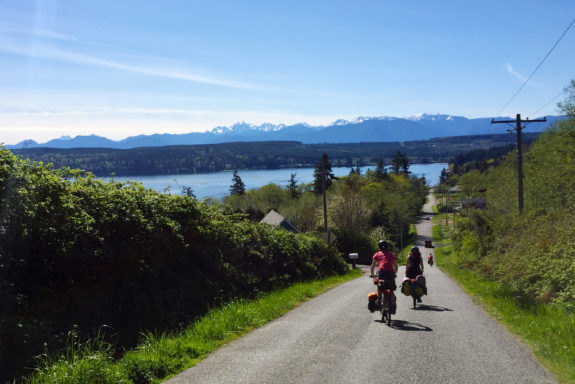 Three friends and I took advantage of a break in 2017’s seemingly endless rain to hop a ferry to Bainbridge and head out on a bike adventure across the Kitsap Peninsula and along the north side of the Hood Canal destined for Dosewallips State Park.

It was overly ambitious for us, especially since we were not able to start biking out of Bainbridge until 1 p.m. due to work schedules. We like to take our time and take lots of breaks when biking, so we were going to have to push it to get to the camp in time to set up tents and make dinner before sunset. Spoiler: We didn’t make it, but we ended up in an even cooler spot instead.

Here’s our basic route (we didn’t use GPS, but this Google route is mostly correct): 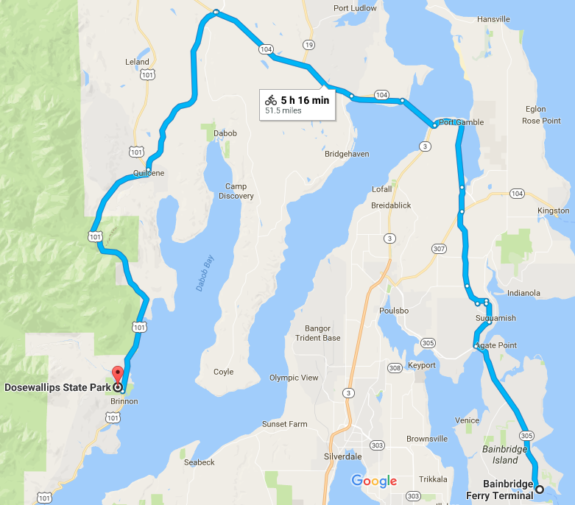 Like so many bike adventures in the Puget Sound region, our adventure began at the downtown Seattle Ferry Terminal. After stopping for a pre-ride slice of pizza in Winslow, we started our journey across Bainbridge Island. We took Hwy 305 to save time and reduce climbing (we would need those legs later). Though it’s definitely not my favorite route on the island, the highway has wide shoulders. In fact, just about every highway on the whole route has good or decent shoulders.

The Agate Pass Bridge at the north end of Bainbridge has a skinny sidewalk with no barrier next to busy traffic, but it is mercifully short. Some people bike across, some people walk their bikes. Do whatever feels best to you.

After that comes the ride into the town of Suquamish followed by the beautiful and somewhat hilly Port Gamble Road. Note that people starting further north from downtown Seattle have the option of biking to Edmonds and catching the ferry to Kingston instead. That could knock some miles off the trip (starting summer 2018, Kitsap Transit will start running a fast ferry from downtown Seattle to Kingston, which will make this trip even easier).

Port Gamble is a great lunch spot (we ate at the General Store restaurant on the way back, which was delicious and had a huge beer selection that was pretty much heaven after many miles of rainy cold biking).

The Hood Canal Bridge is long and can get windy, but there are wide shoulders and — thanks to 2012 advocacy from WA Bikes (then called the Bicycle Alliance of Washington) and other local groups — the stretches of metal grating have a non-slip biking surface that I can now officially confirm works well even in heavy rain. 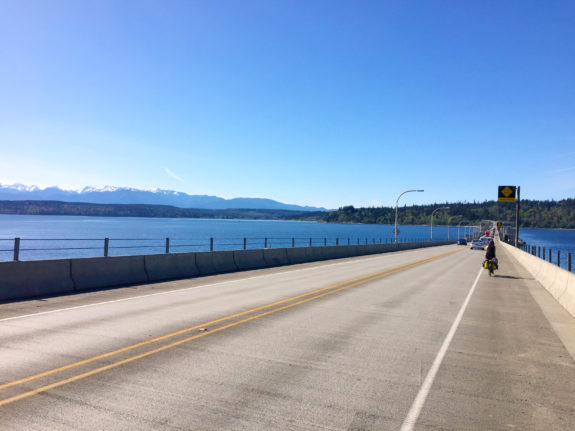 From there, get ready to climb. I highly suggest taking Shine Road shortly after crossing the bridge, a beautiful and welcome break from highway riding. The photo at the top of this post was taken on Shine and was one of my favorite parts of the whole ride.

Once Shine meets back up with Hwy 104 (right before the sign for Shine-Gri-La), you’re going to be on the shoulder for a while. But as far as highways go, this one has rather pretty views and comfortable shoulders. The climb feels like it will never end, but I promise you it does … eventually.

Exit to Center Road, another wonderful stretch of the trip leading to the town of Quilcene. This is a good spot to get snacks and refill water. Also, Peninsula Foods sells ice cream cones. You’re going to want the sugar for the next stretch.

Head out of Quilcene on Hwy 101 and start climbing up toward the pass at Mount Walker. This stretch of 101 has good shoulders on the uphill direction, and it’s not terribly busy. But again, it’s a long and steady climb. Unless you’re in amazing condition, you’ll probably be rather beat at this point (I sure was). We ended up stopping in an abandoned U.S. Forest Service campsite called Falls View. We later looked it up online and found out it “is not open for overnight use due to the extensive root disease and the associated concerns for public safety.”

So while we didn’t get crushed by a falling tree, it is maybe not advisable to camp there like we did. But it is open for day use, and I highly suggest taking the short detour to check out the falls: 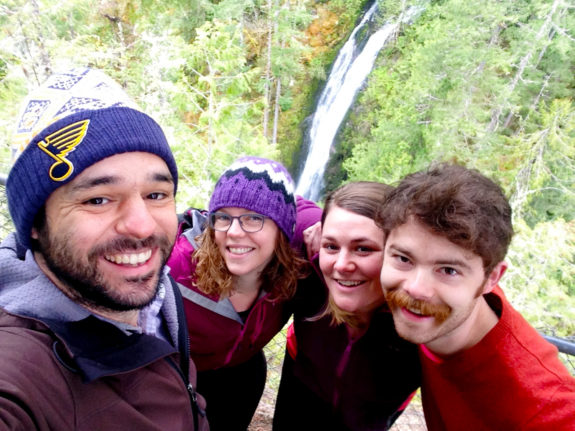 It’s just a short climb from Falls View to the pass, where you can also make a detour to the top of Mount Walker if you want. We skipped this, but I made a note to come back someday.

From the pass, it’s a long, amazing descent through the forest and into Brinnon, home of Dosewallips State Park and the fantastic Halfway House Restaurant. Get pie there. 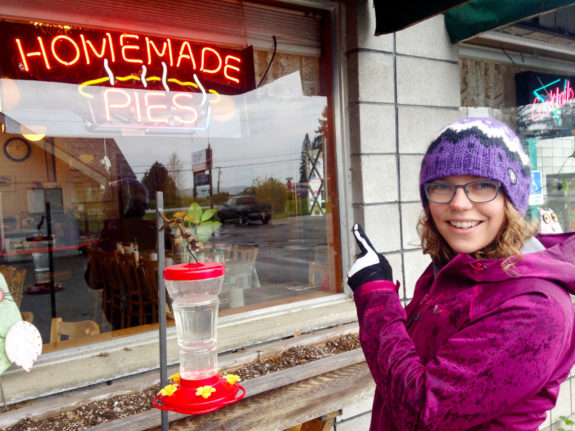 Dosewallips State Park is great. We saw a huge herd of elk while we were there, and I hear the shellfish digging is great. The namesake river that meets the Hood Canal at the site of the park was the subject of a decade-long dispute between Jefferson County/Tacoma City Light and the WA Department of Ecology that made it all the way to the Supreme Court (the good guys won in 1994 with Scalia and Thomas dissenting, setting a major legal precedent for state clean water protection across the country. Tacoma City Light later abandoned its plan to dam the river, and thousands of salmon and steelhead rejoiced.). 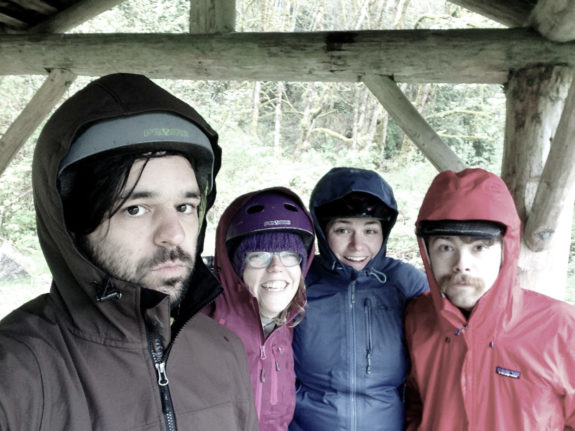 We woke up early Sunday to try to get as far as we could before the forecasted rain began to fall. We got all the way to Hwy 104 before it really started to come down.

I don’t have any photos of the ride back, which you could classify as Type II Fun (on the Fun Scale, Type I is just outright fun that is great while it’s happening. Type III Fun involves some unexpected risk to your health and was in no way fun at the time, but the story is enthralling. Type II Fun is in the middle, not super fun while it is happening but fun to think or laugh about later).

We all tested the limits of our rain gear on the long ride back. Just about anything has its saturation point, it turns out. And once you’re cold and wet and tired, the hills get longer and steeper than you remember. All you can do is keep pushing on one pedal stroke at a time until you finally get home. That’s how much of Sunday went.

But once we got on the ferry back to Seattle, we plopped down in the seats drenched and splattered with mud and started laughing.

“You realize we could have spent this weekend on the couch watching Netflix,” my wonderful spouse Kelli noted. But hey, then we’d have nothing to write about.