Banel: How neighbors in 1970s took action and created the Burke-Gilman Trail 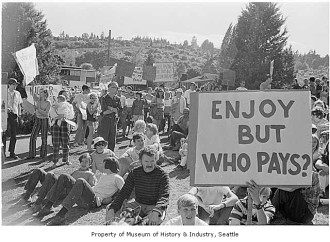 As you pedal or stroll along the Burke-Gilman Trail today, it feels like such an integral part of the city that it is hard to imagine the north end without it (unless you’re in Ballard, of course).

But that trail isn’t there by accident, and it isn’t there because of smart City of Seattle transportation policy. It’s there because neighbors — with the help of a supportive mayor — took action and made it happen, culminating in a 2,000-person “hike-in” along the railroad line calling for the city to preserve the decommissioned line as a public biking and walking path rather than splitting it up into many privately-owned parcels.

Half a century later, the Burke-Gilman has inspired rail-trail across the nation and remains a jewel of the city. During peak commute hours, the trail can move as many people as a lane of a major freeway, but it also serves as a unique way for people to quickly feel very far away from the hustle and bustle of city life.

KIRO Radio’s Feliks Banel caught up with trail activist Merrill Hille and former Mayor Wes Uhlman recently to talk about the effort to create the trail (it also includes a fantastic first-person account of train worker Jack Christensen traveling the route shortly before it was decommissioned). It might be hard to imagine today, but the plans were very controversial back then. But Uhlman and other leaders saw the vision and potential the trail held for the city and spent a lot of political capital making it a reality.

But none of that could have happened without neighbors organizing and pushing hard to make sure the positive vision outweighed the pushback.

The story is familiar, yet also feels fantastical. How could people have ever been against the Burke-Gilman Trail? Perhaps in a half century, people will be asking the same question about the downtown bike network and the protected bike lanes down Rainier Ave…

On Sunday, Sept.  12, 1971, hundreds of people began marching toward Matthews Beach Park along the shores of Lake Washington north of Sand Point. Families, couples, adults and senior citizens converged on the park in two streams – one from the south, one from the north. They marched there that sunny late-summer afternoon along old railroad tracks, on a route that dated to the 1880s.

The “hike-in” and rally was organized by Merrill Hille to draw attention and create support for turning the old railroad tracks to a bike and pedestrian trail.

Elected officials and civic leaders spoke to an estimated crowd of 2,000 people, and the event was a turning point in the history of what became the Burke-Gilman Trail.

With the route for the final “missing link” to the trail announced last month, it’s worth looking back nearly 50 years at how a group of neighbors helped to create a priceless asset for local commuters, recreational hikers and bikers that also served as inspirationfor other “rails-to-trails” projects around the country.

3 Responses to Banel: How neighbors in 1970s took action and created the Burke-Gilman Trail