Bike to these inauguration events and protests 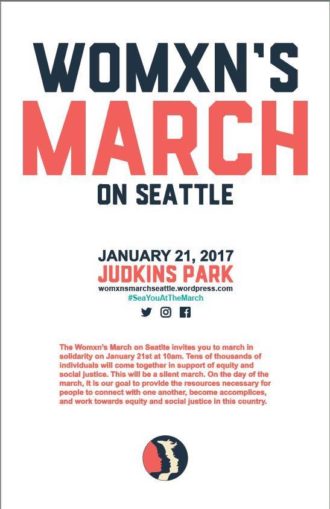 From the Womxn’s March on Seattle event page.

Well, it’s official. Donald Trump is President. Now what are you going to do about it?

If you haven’t already, be sure to check out the Stranger’s Resistance Calendar, which is packed with different events and protests over this weekend. Bike to something. Meet people. Strengthen your community.

The biggest event happens tomorrow (Saturday) in solidarity with the Women’s March in Washington DC. As the X implies, the Womxn’s March on Seattle is intentionally intersectional.

“It is our goal to provide the resources necessary for people to connect with one another, become accomplices, and work towards equity and social justice in this country,” the official poster reads.

The march meets 10 a.m. at Judkins Park and will march to Seattle Center.

With 50,000 people estimated to attend, I don’t need to tell you that driving to the start is a bad idea. But Judkins Park is directly connected to the I-90 Trail and popular bike routes to most of the city. You know what to do. 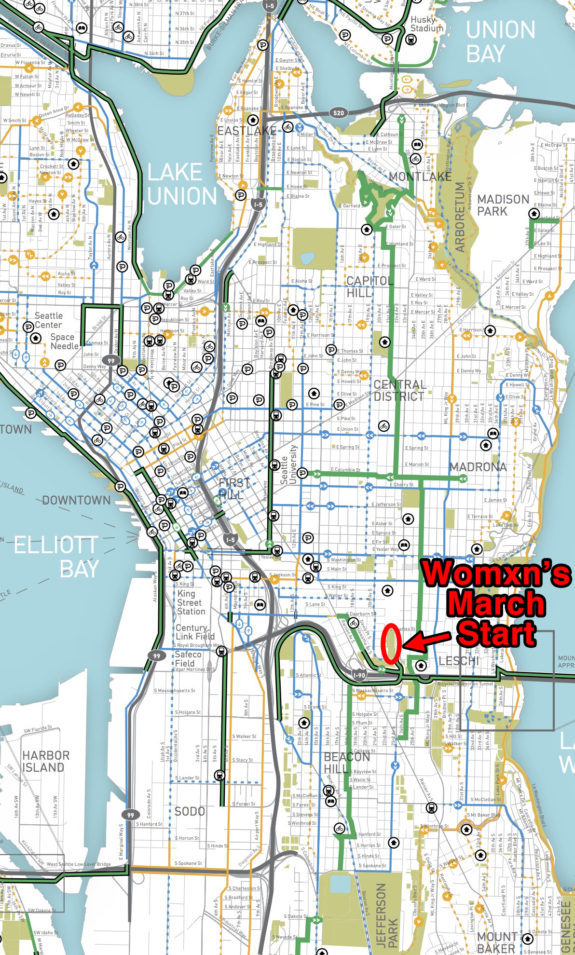 (Note: The organizers requested in an event FAQ that there be no bicycles in the march itself. Though people often walk with bicycles in other big Seattle marches, be prepared to lock your bike at the start or to lock it at the finish and take transit to the start)

More details from the event listing (on Eventbrite and Facebook):

On January 21st, 2017 we will join forces and unite for the Womxn’s March on Seattle in solidarity with the national Women’s March on Washington D.C. We invite people of all gender identities, ethnicities, ages, abilities, religions, and sexual orientations to come participate in this amazing event.

Building on the legacy of the 1963 March on Washington, we continue to hold these difficult discussions surrounding race, since it has consistently played a huge role in the fight for gender equality. It is vital that we continue to incorporate people of color in these discussions, and that we learn from history. By promoting intersectionality within our movement, we hope to elevate the level of understanding for all marginalized groups, as they will be most affected by the Islamophobia, anti-Semitism, xenophobia, homophobia, transphobia, classism, racism, and sexism of this new administration. If we do not prioritize the most vulnerable voices, then we will not succeed as a movement.

In response to the election many of us have felt scared, angry, or sad; but most importantly, this election has ignited the fire in many of us to stand up for human rights and get involved in our community. We recognize that this is a continuation of the work marginalized groups have been fighting for decades, and this march will serve as a catalyst for people to get more involved with those communities. It is our goal to provide the resources necessary for people to connect with one another, become accomplices, and work towards equity and social justice in this country.

This entry was posted in news and tagged Donald Trump, judkins park, womxn's march on seattle. Bookmark the permalink.

3 Responses to Bike to these inauguration events and protests