More than 90 people gathered on Seattle’s statistically-most-likely-to-rain day of the year to ride bikes all around town buying food to donate to their neighbors.

Huge thanks to everyone who came out Saturday (and extra big thanks to Eliseo Calixtro, who helped us organize this year’s event). With so much troubling national political news, it was great to see people bust their asses for their community. And from what I can tell from photos posted to #CranksgivingSEA, it seemed like folks had fun doing it (see some of them below).

Likely due to heavy rain in the morning before the ride (and me getting a later-than-usual start on promotions), turnout was a bit below 2015’s record turnout of 160 people on an unseasonably bright and sunny day. There’s no pre-registration or entry fee for Cranksgiving (your grocery bill is your fee), so turnout can balloon depending on weather. 90 people on a day threatening heavy rain is actually quite impressive, and year-round rainy weather biking is part of what Cranksgiving is all about.

As the organizer, I gave riders a list of items RVFB requested and a list of some of Seattle’s unique grocery stores and markets. People rode alone or in small teams to get as many items from as many different places as possible within the time allowed. You get one point for each item and place marked off the list (plus some photo challenges).

Riders donated their food at the food bank before heading up the street to the Royal Room for an after party and prizes from Peddler Brewing, Flying Lion Brewery, Free Range Cycles, Electric Lady, Detours Bags, Mountaineers Books and my amazing spouse Kelli. 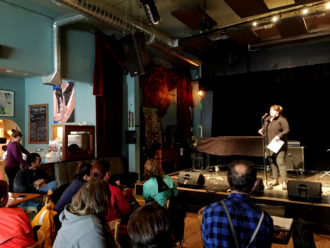 Elise Cope, Associate Director of RVFB, tells the crowd about her organization’s work.

Thanks to RVFB Associate Director Elise Cope for joining the after party Saturday to talk about the organization’s growing work load. Unfortunately, their building is bursting at the seams as demand for their services continues to grow every year. Cranksgiving has become one of their biggest food drives of the years, but the growing need goes much deeper than any bike ride can cover.

That’s another part of the Cranksgiving mission: Engage more people in their community’s food security needs. Bikes are a powerful and fun way to bring people together. At the after party, I challenged attendees to come up with more ideas for ways bikes can help organize people around food security and other social issues. I extend that challenge to you, dear readers. 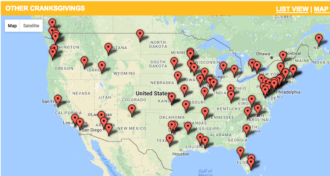 Started on the East Coast, Cranksgiving now happens in cities all across the US (and into Canada). The original organizers encourage other communities to run with the idea in their own communities, and they even have a handy guide to get you started. Seattle Bike Blog hosts Seattle’s annual event.

Locally, Cranksgiving happened over the weekend in Seattle, Port Townsend and Sequim.

Below are some of the year’s photos posted to social media. But first, Russ and Laura from the Path Less Pedaled were in town and swung by to see the start of the ride and shot this short video:

Fulfilling all the #cranksgivingsea photo checklist to dos. Lake union is so refreshing in the fall ?

#cranksgivingsea #epacc team selfie with the space needle and your toe in lake union.

Founder and Editor of Seattle Bike Blog.
View all posts by Tom Fucoloro →
This entry was posted in news and tagged cranksgiving, cranksgiving 2016. Bookmark the permalink.