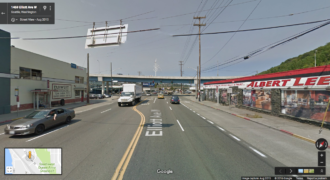 Approximate location of the collision. Image via Google Street View.

A man in his 50s was critically injured Monday evening when he and a man driving a Chevy Blazer collided in Interbay.

We send him and his loved ones our best wishes.

Seattle Police are investigating, and have not yet said how the collision on Elliott Ave W near the W Galer Street Flyover bridge occurred.

While it is not clear where the injured man was trying to go, the Galer overpass is one of very few opportunities to cross the railroad tracks that separate Elliott and 15th Ave W from Magnolia and the Elliott Bay Trail. A photo posted by KIRO’s Peter Frerichs suggests the collision happened in the middle of the street near a southbound left turn lane for people accessing the Galer bridge. There are also RapidRide bus stops on both sides of the street. 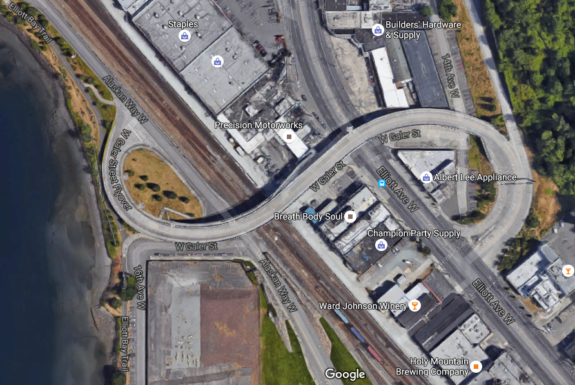 The street is very wide (seven lanes at the point of the collision) with fast traffic, but development in recent years is turning Interbay into more of a neighborhood with a wide variety of uses in addition to industry.

Detectives from the Traffic Collision Investigation Squad (TCIS) are conducting an investigation following a collision between a Chevy Blazer and a bicyclist last night in the 1400 block of Elliott Avenue West.

At 5:30 pm Monday evening, a cyclist travelling southbound in the 1400 block of Elliott Avenue collided with a northbound Chevy Blazer, driven by an adult male.

The cyclist sustained life-threatening injuries in the crash and was transported to Harborview Medical Center by Seattle Fire medics.

TCIS detectives responded to the scene to investigate.  A DUI/Drug Recognition Expert officer evaluated the driver of the Blazer for any signs of impairment and determined the driver was not impaired.

This remains an active and on-going investigation.

Founder and Editor of Seattle Bike Blog.
View all posts by Tom Fucoloro →
This entry was posted in news and tagged elliott ave, interbay. Bookmark the permalink.